The Flood of 2013: a summer of angry rivers in southern Alberta (M)
by the Calgary Herald 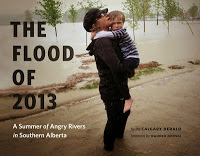 “The Flood of 2013 chronicles an unforgettable summer of angry rivers, unprecedented flooding and undeniable human spirit.

This book looks at how the disaster irrevocably changed southern Alberta and its people. In the face of disaster, Albertans showed their true grit and rose above adversity—just like their ancestors did for generations before them. The flood began in southern Alberta on June 20 and led to four deaths, billions of dollars in damage and more than 100,000 people fleeing their homes to escape raging waters. More than eighty Herald journalists—photographers, writers, editors, videographers, researchers and digital producers—became involved in narrating the tale of the flood. Using their words and images, this stunning volume captures not only the devastation and destruction of the flood but also the emergence of heroes and heartfelt moments. Neighbours helped neighbours. Strangers helped strangers. And Albertans vowed to recover, come hell or high water.” publisher

Washed Away: how the flood of 1913, America’s most widespread natural disaster terrorized a nation and changed it forever (M)
by Geoff Williams

“The storm began March 23, 1913, with a series of tornadoes that killed 150 people and injured 400. Then the freezing rains started and the flooding began. It continued for days. Some people drowned in their attics, others on the roads when they tried to flee. It was the nation’s most widespread flood ever—more than 700 people died, hundreds of thousands of homes and buildings were destroyed, and millions were left homeless. The destruction extended far beyond the Ohio valley to Illinois, Indiana, Michigan, Nebraska, Pennsylvania, Tennessee, Arkansas, Louisiana, Kentucky, West Virginia, New York, New Jersey, and Vermont. Fourteen states in all, and every major and minor river east of the Mississippi. In the aftermath, flaws in America’s natural disaster response system were exposed, echoing today’s outrage over Katrina. People demanded change. Laws were passed, and dams were built. Teams of experts vowed to develop flood control techniques for the region and stop flooding for good. So far those efforts have succeeded. It is estimated that in the Miami Valley alone, nearly 2,000 floods have been prevented, and the same methods have been used as a model for flood control nationwide and around the world.” publisher

“Revolutions, droughts, famines, invasions, wars, regicides – the calamities of the mid-seventeenth century were not only unprecedented, they were agonizingly widespread. A global crisis extended from England to Japan, and from the Russian Empire to sub-Saharan Africa. North and South America, too, suffered turbulence. The distinguished historian Geoffrey Parker examines first-hand accounts of men and women throughout the world describing what they saw and suffered during a sequence of political, economic and social crises that stretched from 1618 to the 1680s. Parker also deploys scientific evidence concerning climate conditions of the period, and his use of ‘natural’ as well as ‘human’ archives transforms our understanding of the World Crisis. Changes in the prevailing weather patterns during the 1640s and 1650s – longer and harsher winters, and cooler and wetter summers – disrupted growing seasons, causing dearth, malnutrition, and disease, along with more deaths and fewer births. Some contemporaries estimated that one-third of the world died, and much of the surviving historical evidence supports their pessimism. Parker’s demonstration of the link between climate change and worldwide catastrophe 350 years ago stands as an extraordinary historical achievement. And the contemporary implications of his study are equally important: are we at all prepared today for the catastrophes that climate change could bring tomorrow?” publisher