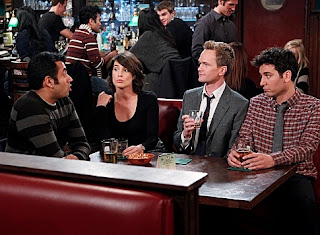 Can you believe last night was How I Met Your Mother‘s 150th episode? Actually, I can – this show has been around for a while now and, in some ways, it’s starting to feel tired. For me, “46 Minutes” was hit and miss. There were bits I loved, but there were also bits that felt tired. All in all, I was happy with the way things ended – the gang all having breakfast at Marshall and Lily’s new Long Island home. It’s a sign that the show is growing up, something I think it needs to do in order to deliver fresh material.

There were definitely bits I loved, like the two re-imagined credit sequences and the idea of “New Relationship Chicken” which is totally a thing.

I think the show lost me when the gang (minus Marshall and Lily, plus Kevin) visited a strip club. I get it – without the sane presence of a married couple, no one said no to Barney’s proposition of going to a strip club. But with the return of Lily’s stripper doppelganger, the whole thing just felt recycled to me. The strip club was followed by a series of shadier and shadier events, but throughout the whole thing I just never really understood why anyone was doing this.

Meanwhile, Marshall and Lily struggled with what it means to be homeowners – specifically, finding the fuse box. It was funny enough, and I liked seeing the whole gang have breakfast together in the morning. But for the show to be able to continue, I feel like Ted, Robin and Barney are going to have to start to catch up to where Marshall and Lily are in life. Where is Ted’s house? Is it near Long Island? Why do we hardly ever hear about it?

I don’t know why else the episode didn’t really do it for me, but I hope the show doesn’t continue to feel off now that Marshall and Lily are living in the suburbs. What did you guys think of “46 Minutes”?  Let me know, and check out a few other quotes and moments that made me chuckle.