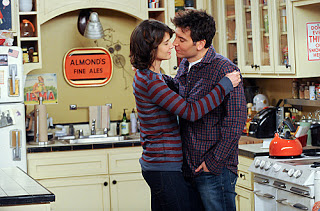 For those of you who were angry about last week’s episode of How I Met Your Mother, I hope you enjoyed last night’s episode. I know I did.

I would have been OK with Ted and Robin trying to be in a relationship again, but I liked how instead “No Pressure” was the culmination of everything we’ve seen so far this season. Ted’s complicated relationship with Robin, which Victoria warned him about at the beginning of the season. Robin and Barney’s messy, ill-timed feelings for each other. Lily and Marshall’s roles as spectators. It all worked perfectly.

After dropping the “I love you bomb” on Robin, Ted didn’t have a lot of time to talk about it with her because Robin had to jet off to Russia for work. So instead he was left to rehash the situation with Marshall and Lily. Lily kept giving Ted the worst advice on how to declare his love for Robin, and Barney knew why – he’d discovered their box of long term bets! 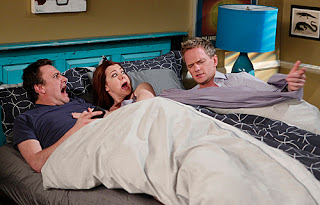 It was incredibly funny – Barney slept in Marshall and Lily’s bed thanks to a drunk train trip gone awry (they didn’t know this until they awoke) and when he misheard something Lily said he ransacked their house looking for a sex tape. Instead, he found a cash box marked “long term bets” and discovered that the couple had been placing bets on their friends’ lives for years now. Hilarious ones, like whether Ted would go bald or Barney would die of murder. And, at one point, Lily bet Marshall that Ted would not end up with Robin. Hence, all her advice was designed to push the two apart. This kind of made Lily look like a bitch, but it was only because she really doesn’t think Robin’s the girl for Ted. Still, not Lily’s most flattering moment.

My one problem with the episode was that Ted realized too easily that the reason Robin didn’t love him back was because she’s in love with Barney. I mean, there is such a thing as “she’s just not that into you”, Ted. But he had drunkenly seen Barney filling Robin’s room with rose petals and candles, so I guess he did have some evidence to support his theory. Barney laid it all out on the table, how he’d dumped Nora and Robin backed out and didn’t dump Kevin. But when Ted told Barney that she and Kevin had now broken up, he didn’t really react. In fact, he wished Ted the best. Ted took Robin on a romantic, memory-filled date, but the chemistry just wasn’t there. At the end of the night, Robin had to tell Ted she doesn’t love him, and Ted had to tell Robin their “when we’re 40” deal is off – the door can’t be open for them anymore, not even a little bit.

I’m glad the show did this, and officially closed the door on Ted and Robin. The viewers needed it, and so did Ted’s character. Marshall knew that, and as Ted’s best friend he had to do what Ted couldn’t. He had to tell Robin to move out of the apartment. Now Ted’s free to get over his heartbreak and move on. And as we saw at the beginning of the episode, the next time he says “I love you” will be to The Mother.

Obviously, I wish we’d get to this moment sooner rather than later. I’ve long been part of the “I’m read to meet the mother” camp when it comes to HIMYM. And I know that seeing all those yellow umbrellas at the end of the episode could just be a tease, that the writers might not be planning to introduce her soon. But damn, how I wish they would.

What did you guys think of the episode? Was it a good recovery? Do you think it made sense for these characters to have to officially close the door like that? Will Robin and Barney find themselves together again – maybe for good?

Here are some of my favorite quotes and moments:

Conan On ‘How I Met Your Mother’

How I Met Your Mother: 99 Yellow Umbrellas
https://haligonia.ca/how-i-met-your-mother-99-yellow-umbrellas-54921/