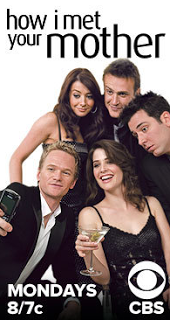 How I Met Your Mother returned last night with two episodes, and I’m pretty sure they were both better than the majority of episodes we saw last season. Let’s start with the premiere.

Two Weddings and a Baby

So, we’ve missed a lot over the summer. Ted is famous, Marshall and Lily are expecting (I’d actually forgotten that we learned that in the finale, so I was excited all over again), and Barney left about five messages for Nora. The gang’s been busy! Except for Robin, who continued to secretly pine away for Barney. 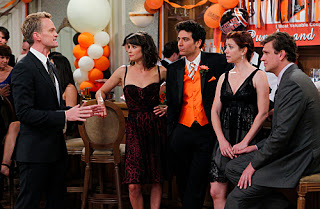 We started with Ted telling his kids, in the year 2030, about Barney’s wedding. But that didn’t last long, since when Ted was easing Barney’s pre-wedding jitters they flashed back to the worst wedding ever, Punchy’s. There was a lot going on. First of all, Lily realized that Robin still had feelings for Barney since she used her “truth voice” when she talked about him. I loved all the flashbacks showing when Robin does that. She ended up coaching Barney through a surprise phone call from Nora, and it was pretty heartbreaking to hear Barney tell Nora all the things that Robin is feeling for Barney. I’ve always said that I don’t really want Robin and Barney to end up together, but at this  point I feel like they’ve made it pretty impossible to not to root for them as a couple. I just don’t care enough about Nora, but I really do buy the chemistry between Barney and Robin.

Meanwhile, Lily wanted to keep her pregnancy a secret until she hit the second trimester safe zone, so that meant Marshall had to sneakily down all her drinks. And that meant he got epically drunk. I loved watch Marshall transition for obnoxiously bragging up Ted (who’d been featured on the cover of New York Magazine because of his skyscraper) to cooing over every baby at the wedding. He and Lily broke the good news to the gang right before Ted’s toast, so he delivered another one of the tearful speeches he’d become known for with his high school friends. I thought that stuff was great – very classic Ted. These episodes were the first time in a while that I found Ted charming.

It was also great how Marshall ended up ruining the wedding by accidentally announcing the bride was pregnant – he’d been pointing at Lily, but the bride didn’t know that and thought he’d spilled the beans. It all worked perfectly.

The second episode (I was so excited to get two!) picked up the next morning, with a painfully hungover Marshall and an exciting job offer from Martin Short. Well, Martin Short playing the head of an environmental company. As long as a background check and Google search didn’t bring up any unsavory information, Marshall was in.

That led to a hilarious sequence where Marshall discovered a video of himself drunkenly streaking during his college days, and then he ended up making a sequel when he went to try and get it taken off the Internet. In the end his new boss saw the video and didn’t care, so Marshall is again employed. Marshall had a hard year last year, so I’m excited for him to have a fresh start this year with a new dream gig and a baby on the way.

Barney wasn’t having quite such good luck though. He kept screwing up his second chance with Nora, and I think that’s part of why I can’t get on board with them as a couple. She seems so proper and intelligent, and I just don’t see them together yet. It was sweet when Barney declared that he’d remain in a 24 hour diner until she gave him a second date, and she returned to see that he’d kept his word.

In possibly his best storyline since well before Zoe (shudder) entered the scene, Ted realized that he could use his magazine cover to score dates with women. Well, two dates. While he liked both girls (one was awesome in every way, the other reached for the cheque) he didn’t have a real spark with either. So he took Robin as his date to the big fancy architects’ ball…but it was who he saw there that was really important. Victoria! The pastry chef Ted met in season one. They ended things when she moved to Germany and long distance didn’t work out.

Even though Victoria’s not The Mother, I think she could be a good transition girlfriend for Ted. I’ve mentioned before on the blog that she’s my favorite of Ted’s exes (not counting Robin, because I consider her part of the gang and not just an ex) and I’d like to see her around this season. Even though I’m ready to meet The Mother, I know the show isn’t ready to introduce her (they made about six obnoxious jokes last night to get that point across) and I’d like to see Ted in a fun relationship in the meantime. Romantic Ted is way more endearing than Single Guy Ted, and I would totally believe that he and Victoria would give it another go. She doesn’t have to be The Mother for this to produce good storylines, so I hope they explore it. 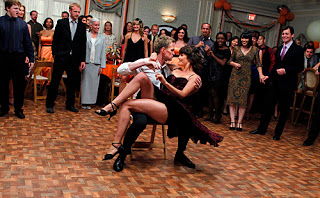 What did you guys think of the first two episodes? Do you think the show can redeem Ted this season? Which of Barney’s plays he market researched at the wedding was the best? (Personally, I liked “Patient Zero”, since it was such an obvious fail.) And do you think that the fact that Barney’s bride wants to talk to Ted means it has to be Robin? And how great was that dance? Discuss!

How I Met Your Mother: Babies, Beercules and Barney
https://haligonia.ca/how-i-met-your-mother-babies-beercules-and-barney-43854/