Leave it to How I Met Your Mother to take an idea that is inherently disgusting – dating one of your parents – and make it completely hilarious. In “Noretta”, the gang all slowly started to realize that they’d entered into relationships with a person really similar to either their mom or dad…and then imagined it that way.

It was this back and forth that made the episode really work for me – I mean, how can you not laugh at the imaginary image of Marshall’s dad and Lily’s dad getting romantic in the bedroom? 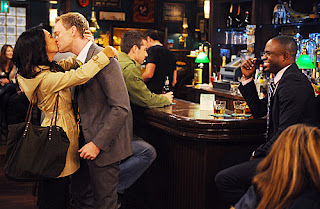 It all started when Barney’s brother James (Wayne Brady) visited and told the gang he couldn’t get on board with the Barney/Nora relationship because Nora reminded him way too much of their mom, Loretta – hence, “Noretta”. I thought Wayne Brady was so funny in this scene (I loved how he got the gang to ask him what he really thinks of Nora three times before he’d drop the truth bomb) that even though I liked the episode, I was bummed that he wasn’t in it more. Kevin, the group’s resident therapist (for now), explained that it was totally normal to end up with people really similar to your parents.

And there it began. Lily started imagining Marshall as her dad, thanks to their mutual love of board games. At first, Marshall insisted it was all a load of crap – Lily’s nothing like his mom. But that’s because she’s like his dad! I actually thought this was a really funny way to bring up Marshall’s dad again. Yes, we spent a long time mourning him and that was very good material for Jason Segal. But the montage of ways Lily and Marshall’s dad are similar was hilarious, and I liked being able to see Marshall’s dad in that light.

Even Kevin started to get weirded out by his own theory, when he briefly saw Robin as his own mom, complete with causing his inferiority complex. This was probably the first time I really loved a storyline with Kevin in it since Kal Penn arrived. Since Stella already set us up for the idea that Robin and Ted’s relationship is too close, it was nice to move that forward and see how it’s not just impeding Ted’s love life, but Robin’s as well. And it was a really sweet moment when Kevin realized that Robin was spending so much time with Ted because he had no one else to spend it with – he even pretended to be a fan of Weird Al Yankovic (who isn’t a fan? Ted you should have called me!) so Ted wouldn’t have to go to the concert alone. I think we’ve all been in this situation before, where you’re single and all your friends are coupled up. It’s lonely. But it was also clearly uncomfortable for Kevin, so it was fun seeing that play out.

Meanwhile, it was the Barney/Nora date that kind of left me disappointed. When we met Nora, she was a laser-tag playing, cool chick that Barney instantly fell for. Now, I don’t really see any chemistry. Yeah, it was funny to see Barney desperately try and salvage the evening – but if the showrunners want me to be really invested in this relationship, I need to see more of a spark between the two. Robin and Barney had oodles more chemistry together. At least it was a very sweet moment when Barney reminded his friends that his mother is awesome, and if Nora’s even a little bit like her then he’s a lucky guy.

Not all the reviews I’ve read of “Noretta” have been positive so I won’t be surprised if some of you guys weren’t into it, but as I said I really dug it. So let me know what you thought in the comments section (and if you’re with someone who reminds you of your mom or dad!) and check out my favorite quotes and moments below: 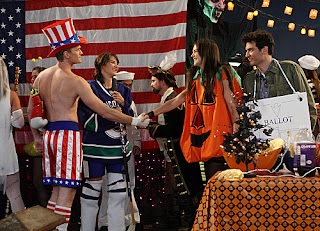 How I Met Your Mother: Daddy Issues
https://haligonia.ca/how-i-met-your-mother-daddy-issues-47122/