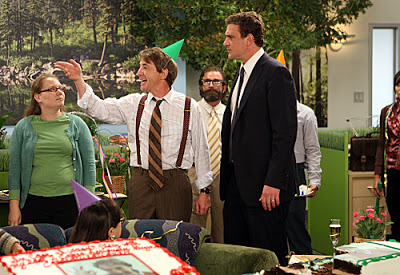 There wasn’t a whole lot of overlap in the characters’ storylines on How I Met Your Mother this week, but the stories were, for the most part, strong enough that that didn’t matter.

Kal Penn returned as Robin’s therapist Kevin, and was much more charming than last week. He bailed as Robin’s therapist because he developed a crush on her, and after a few “not-dates” they decided to actually date – even though all of Robin’s friends and a focus group thought it was creepy. Yeah, OK, a bit creepy – but it was kind of cute when Robin evened the playing field by reversing the roles and acting as therapist for Kevin. I don’t think this romance will pan out, but I’m hoping Robin entering into a new relationship will at least stir up some emotions when it comes to this Robin-Barney-Nora triangle.

Speaking of Barney, his storyline was the one I wasn’t really sold on this week. I mean, assuming Nora was at least 37 years old because she didn’t like Ewoks? Has he never encountered a person before who didn’t see the Star Wars films until later in life? Besides, the whole fixated on age thing felt so old news. If Barney is supposed to be as head over heels for this girl as we’ve been lead to believe, it wouldn’t have taken him that long to accept the fact that she’s older. It just felt like a very stunted storyline for his character.

Meanwhile, Ted took his Intro to Architecture class on a field trip that was mostly a disaster, but ended up at least providing an excellent focus group for Ted and Barney to settle every debate they’d ever had. I liked seeing this side of Ted again – the desperate to please/impress professor just dying to inspire one of his students.

It was Marshall who acted as MVP in this episode though, alongside Martin Short as his new boss, Garrison Cootes. Marshall worried that Garrison had gone soft after accepting a ridiculously small settlement offer from a big, bad, polluting company. In fact, it was even worse – they celebrated the measly “victory” with several sheet cakes, because Garrison hadn’t just gone soft, he’d given up altogether. He’d decided that the planet was beyond saving and there was nothing they could do but fill up on red velvet and wait to die. And Marshall bought into that too, until he saw an ultrasound video of his baby.

I loved how Marshall marched back to the company to reject their offer and completely failed. He made fish jokes and then “floundered”, as he said. So when Garrison stepped in with his terrifying death stare and saved the day, you respected him. Sure, he’d lost the will to fight earlier in the episode but thanks to Marshall he’s back, and obviously Marshall could use him as a mentor. When he said he and Marshall were going “to war, son” I got really excited about where this storyline will go.

So what did you guys think of “Field Trip”? Are you liking Martin Short’s guest appearance more now? And of course, check out the weekly list of favorite quotes and moments:

How I Met Your Mother: Field Trip of Dreams
https://haligonia.ca/how-i-met-your-mother-field-trip-of-dreams-46070/