How I Met Your Mother wasted no time getting back into our lives by airing an episode on January 2nd, but you won’t hear me complaining. “Tailgate” gave us Marshall recounting the New Year’s Eve exploits of the whole gang, and set up a new career path for Robin. 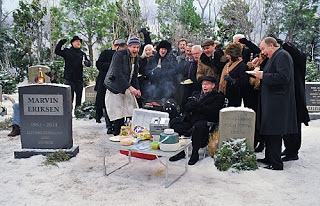 The NYE stories were told by Marshall, who’d flown to Minnesota to continue a tradition of New Year’s Day tailgating at his dad’s headstone. Marshall’s own story was simple, but sweet – he kept getting interrupted when all he wanted was some alone time with his dad, but when someone accidentally called him by his dad’s name he realized truly honoring his father meant embracing all the people around him. It was nice, and I like the fact that the show hasn’t dropped what was such a good storyline and still acknowledges that Marshall misses his dad.

Meanwhile, Lily was disappointed when she finally delivered the news that she’s pregnant to her dad and got no reaction. Lily’s relationship with her dad is the polar opposite of Marshall’s, and he didn’t really realize how much she was hurting. I could have done without Lily and Marshall’s disagreement over whether to raise their child “believing” (in things like sasquatches and UFOs, obviously) but I liked seeing the juxtaposition of their two upbringings. In the end Lily’s dad came through, showing up on her doorstep with a giant teddy bear. 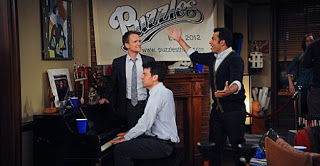 Meanwhile, we revisited the storyline of Ted and Barney’s dream to open a bar called puzzles. This was a silly storyline that delivered a lot of laughs, so I was a big fan. McLaren’s on New Year’s Eve was crowded and overpriced, and after opening Puzzles in Ted’s apartment, the guys realized it’s not so easy to run a bar.

I thought the episode really belonged to Robin though, who experienced some professional success after dealing with the emotional news that she can’t have children in the last episode of 2011. She was originally spending New Year’s Eve with Kevin (who later acted as the bartender at Puzzles) but left to go to work when the producer Sandy was sleeping with quit. One drunken Sandy mistake led to another, and he disappeared (to Puzzles the bar!). Robin’s only option was going on air herself, something that had more than a little to do with Kevin.

Through a flash-forward (of sorts, since the whole show is a flashback) we got to see that the night was a big break for Robin that would lead to her co-anchoring the news with Sandy. It was a tad predictable, but I liked seeing Robin take control of the situation and it’s nice to know things will start to get better for her. With the Barney stuff and the baby stuff, it’s about time things went her way.

All in all I thought “Tailgate” wasn’t a fantastic episode, but kicked off 2012 for the gang in a solid, funny way. What did you guys think?

How I Met Your Mother: Not so puzzling
https://haligonia.ca/how-i-met-your-mother-not-so-puzzling-51835/