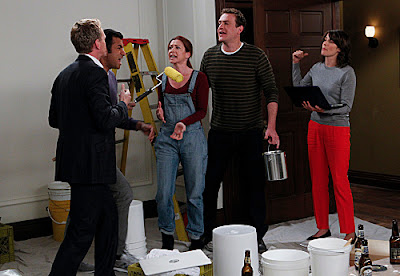 After seven seasons of  How I Met Your Mother, one thing has become obvious: these people are freaks.

They’re highly emotional, neurotic, obsessive, co-dependent (and occasionally physically violent) and we love them for it. But sometimes we forget that it’s also kind of weird. They are extremely involved in each other’s lives. So enter Kal Penn, playing Robin’s new therapist boyfriend Kevin. At first I wasn’t sure how he’d fit into the cast (or how long he’ll stick around for) but last night’s episode proved that sometimes it can help to have a fresh take on things.

In fact, I wish HIMYM would do this more often – put a new love interest into many scenes with the gang. I mean, Barney is supposed to be so into Nora but how often do we see her at McLaren’s, just hangin’ out with the gang? With Kevin around, he was able to call everyone out on their ridiculous behavior.

The episode’s title, “Mystery vs. History”, summed up the great debate of the episode – is it better to know everything you can about someone or something, or to let it unfold over time? For Ted, it meant decided whether or not to Internet stalk women he was about to go out with. For Lily and Marshall, it meant deciding whether or not to find out the gender of their baby.

For Ted, finding things out in advance backfired. He went out with a gorgeous girl and didn’t research anything about her in advance, but the gang couldn’t resist. They found something big and immediately texted it to Ted. And poor Ted, how could he not look? He kept imagining scenarios where his date was a prostitute, or was actually a dude, or didn’t really like Annie Hall that much. So he clicked, he saw, and he panicked.

It turned out that Ted’s date was actually a legend – among other things she’d graduated from Princeton at age 15, donated a kidney, climbed Everest and rescued a baby. Ted was immediately intimidated and started blubbering about he donated blood once, but he fainted and they had to put it all back in.

The only thing I didn’t quite get about this storyline (which I did really like) was why everyone would absolutely have to text Ted that information. Wouldn’t they know he’d be intimidated? There was nothing there that couldn’t wait until he’d returned from his date. I suppose they were just proving Kevin right, but I couldn’t help but be a bit peeved at the gang for ruining Ted’s date.

Meanwhile, Marshall and Lily were trying to stick to their guns and not look at a piece of paper Dr. Sonya had given them with the baby’s sex on it, despite Barney screaming “I gots ta know!” at them. There were a lot of good reasons to know – the shade of yellow they’d chosen for the baby’s room looked like some toxic sludge that Marshall’s environmental law firm should be looking into, and Barney made a very convincing argument about gender-neutral clothing choices.

Marshall put an end to the debate by throwing the note out the window, but it wasn’t over there. When Ted returned from his date, the paper was stuck to the bottom of his shoe – Lily and Marshall are having a boy.

Overall, I really liked this episode. In many ways, Kevin’s diagnosis of this group of friends as sickeningly co-dependent (among other things – hi, pathological liar Barney Stinson!) ties into what Victoria told Ted at the beginning of the season. Sure it’s great that this group is so close-knit, but is it also holding them back?

Let me know what you thought of “Mystery vs. History” and check out my list of my favorite quotes and moments below:

How I Met Your Mother: The Outsider
https://haligonia.ca/how-i-met-your-mother-the-outsider-46842/