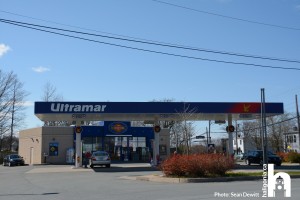 At 1:20AM there was a robbery at the Ultramar located at 219 Pleasant Street in Dartmouth.  The suspect entered the business, pulled a needle on the employee and demanded money.  He was provided with a sum of money and fled on foot towards the downtown area.  Numerous police units and K-9 attended , however we were not able to locate any suspects.  The suspect is described as a white male in his early 20’s, wearing a grey hoodie, a red, black and grey jacket, blue jeans, white sneakers and carrying a red Good Life kit bag.  He incident remains under investigation by the General Investigative Section.