Yesterday, as our brutal winter “departed”, was quite spring-like. in many areas The sun, being as high in the sky as it is in late September, made it feel warmer than the actual temperatures, which remained below normal. 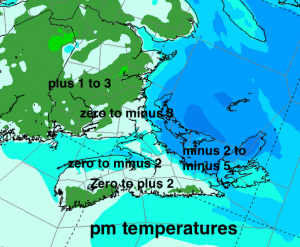 Spring Equinox arrived at 7:45pm last evening; and the length of daylight has accelerated…. But

Late this afternoon and tonight, a rather complex weather pattern will result in some very messy conditions.  A system moving in from the St. Lawrence Valley will spread light snow across northern New Brunswick in the evening.  Meanwhile, a low pressure are passing to the south of Nova Scotia will be accompanied by mixed precipitation; once again later in the day and overnight

As the southern system develops near Sable Island tonight then the systems combine near Cape Breton Island, the precipitation will increase in intensity over eastern areas of the Maritimes, and what begins as rain or wet snow in Nova Scotia or PEI will ultimately change back to snow  as winds increase out of the north .  By Sunday morning winds will shift to strong westerly, and cold air will cover the Maritimes by late in the day. Some snow squalls may persist on Sunday in the Cape Breton Highlands.

Halifax  and eastern areas of Nova Scotia and PEI are at risk of more snow than is currently officially predicted, given the amount of snow and ice cover surrounding the region that may keep the temperatures very close to zero. Either rain or snow, it wall be an awful mess.

The image below for Halifax shows how close the temperature and precipitation types could be, as it switches from snow to rain to snow: more than 15mm of rain or 5cm slush followed by 15+cm snow. Ugh! (click on it for a closer view) 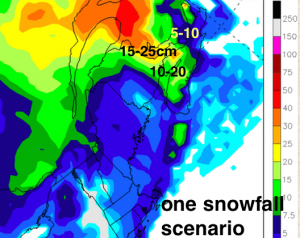 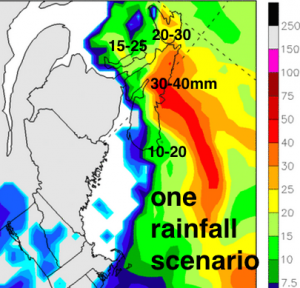 This total precipitation over the Eastern Maritimes will be high, and additional snowfall is just adding to the transportation and clean-up misery. A chance of freezing rain will also make surfaces slippery; as will rain falling on snow packed or ice covered roads or walkways.  Furthermore, 20-40mm of rain plus some snowmelt will cause significant pooling of water, which would turn into local flooding where storm drains and culverts are plugged by snow and ice.

The additional weight of rain and/or snow will contribute to snow loads, which remain a significant threat, especially to any aged infrastructure.  Ice damming continues to be a concern on many roofs.

The drop in temperature Sunday, will result in some icy conditions where slush and pools of water freeze.