April was cool (2-3C below normal), and consequently there was not an excess of rainfall.  However there was between 100 and 200mm of water released from a relatively slow melt from the snowpack.

Given to cold temperatures and ice under much of the snow, perhaps a significant amount of the snowmelt had ran off into rivers, lakes and the sea; rather than soaking into the ground.

The first week of May has been dry, with little if any precipitation reported.  Furthermore, many communities (especially New Brunswick, central and western Nova Scotia) have been enjoying above normal temperatures.  Somewhat surprisingly, as the snow melts in the forests, the fire index is rising quickly.  Some grass and brush fires have been reported, and burning restrictions are in place in Nova Scotia and New Brunswick.

As we move into the weekend and early next week, precipitation will slowly become more likely as a frontal disturbance slides slowly southward from Northern New Brunswick.

On Saturday, a few showers over Northern New Brunswick may clip PEI and Cape Breton late in the day. Otherwise, the Maritimes will enjoy quite a bit of sunshine. 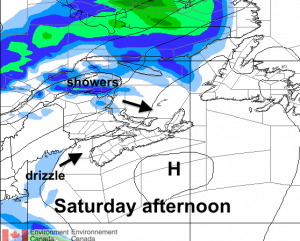 On Sunday the showers are again most likely over the northern half of New Brunswick; but there is a chance some of these may clip Prince Edward Island, and eastern Nova Scotia.  The front will usher in warm airmass… which will enable fog and drizzle to form over the Atlantic and Fundy coasts. However, sunny breaks inland in the southern Maritimes on Mother’s Day Sunday will allow temperatures to climb into the mid twenties! 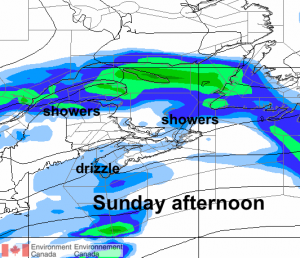 For the first few days next week, bands of showers and rain will continue moving slowly southward into southern New Brunswick, Prince Edward Island and likely most of Nova Scotia… and finally, the Fire Index will lower considerably. 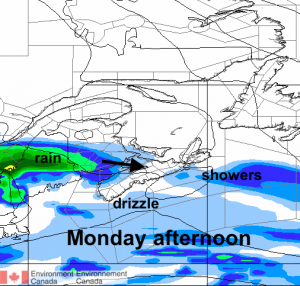 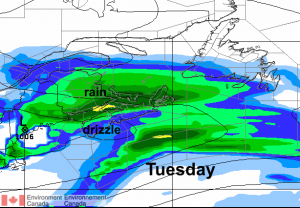 Hard to believe we are in need of rain?
https://haligonia.ca/httpyhzweatherguy-cahard-to-believe-we-are-in-need-of-rain-105989/