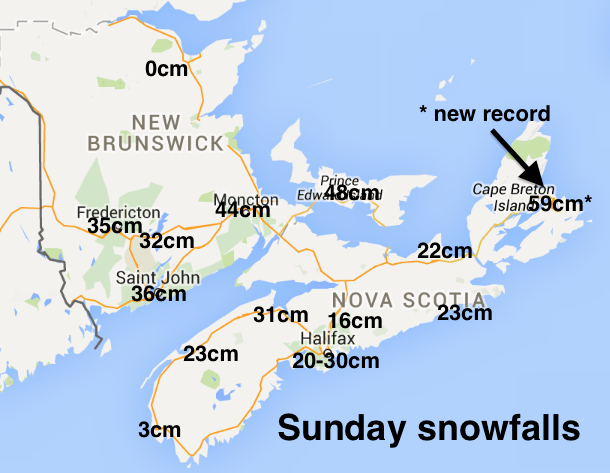 Otherwise amounts for southern New Brunswick and PEI ranged from 35 to 45cm; with central, northern and eastern Nova Scotia, which received some ice pellets and freezing rain, ranging from 20 to 35cm.  CoCoRaHS volunteer stations for today and yesterday will give a detailed snow picture.

The conditions will be slow to improve in central and eastern areas where strong northeast winds and light snow off the Gulf of St. Lawrence combine to keep visibilities low in blowing snow.  Environment Canada had blowing snow advisories in effect this morning. 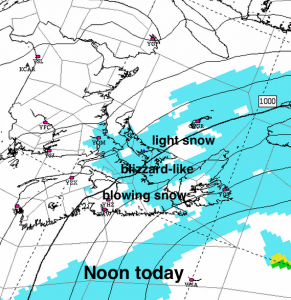 Conditions will start out fine for St. Patrick’s Day on Tuesday, but some more snow will develop Tuesday afternoon in western sections then move east overnight and persist on Wednesday, with the Atlantic coast of Nova Scotia most at risk for more than 10cm. 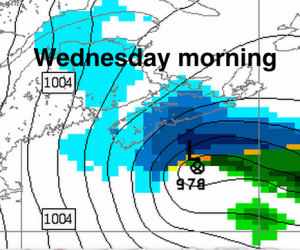 We can expect below normal temperatures, windy and some blowing or drifting snow persisting on Thursday. Nicer on Friday.

The first weekend of Spring (which arrives Friday at 7:45pm) threatens with another messy storm.  Time will tell. 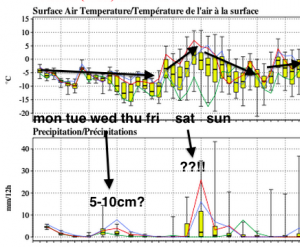