After the strong winds caused extensive areas of blowing and drifting snow on Friday, Saturday will be the day of choice for this mid-February weekend. 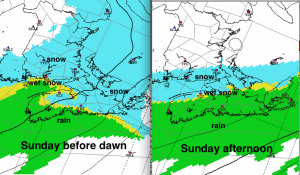 Over the Atlantic coast of Nova Scotia, where the precipitation will change more quickly to rain, rainfalls of 20 to 30mm are expected.  Environment Canada has issued a rainfall warning for the Atlantic Coast of mainland Nova Scotia. February rain is not good, and we might consider preparing for the potential impacts now.

1. Flooding: Some of the 20-3omm of rain will runoff frozen surfaces, causing some snowmelt and pool in low lying areas, including roads.  Ensuring storm drains are clear will help alleviate this mess.

2. The weight of snow will increase by any rain that is absorbed by the existing snowpack.  Due to past rain and ice pellet events, the snow on the ground is very dense in some areas like Halifax.  In my yard, less than 50cm of snow has at least 175mm of water equivalent contained in it.  Roofs in Halifax have been designed for weights equivalent of 225mm of water… so some snowpacks may be approaching critical weights, especially if they absorb more rain on Sunday.

I would suggest if you have more than 60cm of snow (2 feet) piled on your roof or deck in Halifax, you might consider getting professional advice regarding having it safely removed before the rain.

Some advice is available from the National Research Council.

In PEI and Southern New Brunswick, the snow load design criteria is higher than in Halifax (in the 300mm range).  The reports I have seen from those areas are in the range of 125 to 150mm, since the precipitation has been mostly snow.  Any rain will certainly make the snowpack more dense.

3. Icy surfaces: The rain falling on ice covered roads, walkways or parking lots will result in extremely slippery surfaces.  Take advantage of fine weather Saturday to chip away, sand or salt these surfaces to at least rough the surface up.

4. Freeze:  In the areas getting the most rain, it may only drop just below freezing Sunday night; but be quite cold Monday night.  Important to try and remove slush or standing water on Sunday.

Update: Sunday 22 February: how should I prepare?
https://haligonia.ca/httpyhzweatherguy-casunday-22-february-how-should-i-prepare-2-103004/