While the weak low pressure system on Monday was just starting to develop while it passed south of Nova Scotia, there was enough moisture to give 10 to 15cm over some central and eastern sections of the province, as well as parts of PEI.

Temperatures climbed just above the melting point, and dropped once again to minus double digits overnight last night; more slippery conditions this morning. 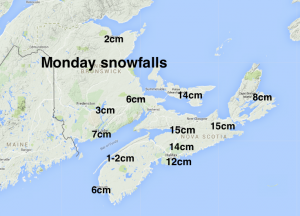 The next system will again be rather weak, essentially a trough of low pressure.  Precipitation will begin in most areas overnight tonight and pass out of the region early Wednesday afternoon.   Once again, the timing of this precipitation suggests a messy and potentially slow morning drive in some communities.even with relatively light snowfalls (less than 10cm).  Southeast winds will result in a brief change to rain over at least the Atlantic coast of Nova Scotia.

With a bit of an onshore southeastwind,  the Fundy coast and maybe some spotty areas along the Atlantic Coast may see 10-12cm of wet snow. 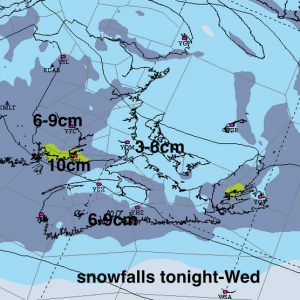 Southwest winds will raise temperatures in many parts of the Maritimes to well above the melting point after the precipitation ends, so some of the snow will melt in the afternoon. Temperatures may not even freeze Wednesday night long the Atlantic coast of Nova Scotia.  You should be able to take your time to clear any wet snow before things start to freeze.

Late Thursday, the Atlantic coast of Nova Scotia may get clipped with a dusting. 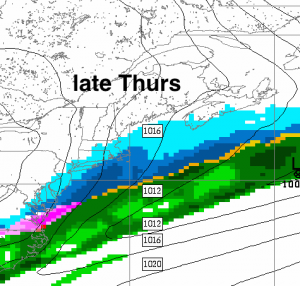 Friday will be fine, but temperatures return well below normal. 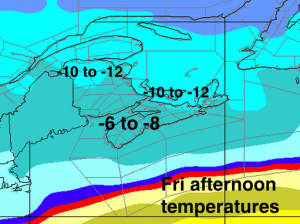 Again, only one weak system expected on the weekend… Saturday night.

These weak systems, while annoying, are better than what we had to deal with in February….