I just finished watching last week’s premiere episode of Huge, a new ABC Family show, and was pleasantly surprised. I’ve never watched a show from the ABC Family network before, and wasn’t sure what to expect. I was worried the show would be sappy, patronizing or too tame. Instead, it was funny, sarcastic, realistic and just a tad touching.
Huge is a teen dramedy (Wikipedia says drama, I say dramedy) about a fat camp. Yep, a fat camp – one of those places that parents send their overweight children to lose weight. So it’s a charged subject. On the one hand, the label “fat camp” is pretty negative and so is the body image of most of the kids attending. Not very healthy. On the other hand, youth obesity is a major problem in the United States and encouraging teens to love the bodies that could one day cause them a lot of medical problems is also unhealthy. But no matter where you stand on the issue of fat camps, you’ll find this show refreshing. 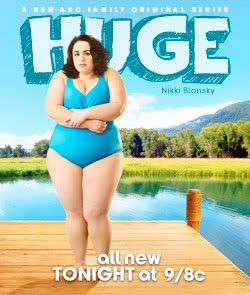 Nikki Blonsky, of Hairspray fame, stars as rebellious, overweight teen Will (or Willamina, depending on her mood). I’m happy to see Blonsky starring in such a smart and funny show. She was fantastic in her debut role as Tracy Turnblad in Hairspray, but roles for bigger girls in Hollywood are hard to come by and I was worried she would fade into obscurity.

Instead, she’s found a role that’s perfect for her. Will arrives at Camp Victory, the show’s fictional fat camp, with a huge chip on her shoulder. She’s only there because her parents forced her to go, and she has an unconventional goal of actually gaining weight while at the camp. She has purple streaks in her hair and a look on her face that says “Inside, I’m laughing at all of you.” I fell in love with her character within the first few minutes when she performed a burlesque-style strip routine in front of the whole camp after being told by the camp director that she had to don her swimsuit for her “before” photo.

That’s not to say Will’s character isn’t flawed. She’s very flawed. She can be argumentative, in self-denial, and occasionally downright mean. But what teenager isn’t? Will’s problems only make her character more likable because no matter what your size is, you empathize with her.

The supporting cast is also stellar. Raven Goodwin plays Becca, a shy repeat-camper who befriends Will despite their contrasting personalities. Hayley Hasselhoff, who is David Hasselhoff’s daughter and is a stunningly beautiful girl, plays the camp’s beauty queen Amber. She’s the thinnest and prettiest girl at the camp, but don’t expect her to be the mean girl. Despite her clashes with Will, she’s revealed to be a sweet and caring girl in the first episode. It’s interesting to watch her reaction to being the queen bee for the first time in her life. There’s also a potential love interest for Will, as well as the not-quite-as-scary-as-Jillian-Michaels camp director Dr. Rand, played by Gina Torres. There’s also Amber’s crush George, a fitness instructor at the camp, the annoyingly perky camp counselor Poppy, and a disgruntled chef named Salty, of all things. The cast is rounded out (that wasn’t meant to be a pun, but now it is) by a group of plus-sized actors portraying other teens at the camp, who we’ll hopefully get to know more in upcoming episodes.

Sure, the show is a bit bubblegum. People do mean things, but no one is really a mean person. And the show has an overriding message of positivity that strikes a balance between loving one’s own body and having a healthy lifestyle. But that doesn’t stop the show from being fresh, funny, and totally worth watching. The second episode airs tonight, and I’m really looking forward to it.