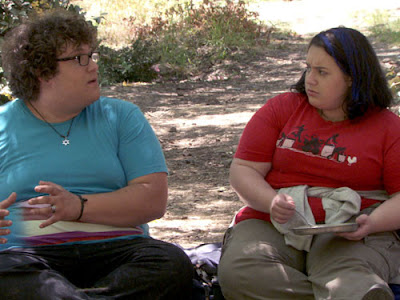 OK, so this week’s episode of Huge was pretty cheesy. But that’s OK. Camp is cheesy, and the “spirit walk” the fictional campers on Huge were participating in was cheesy, so it’s only natural that the show itself would be cheesy.
This is why I hate camp. Going into the woods and “discovering yourself”, coming up with new, “spiritual” names. I’d rather poke myself in the eye. I went to camp once, for a few days on an eighth grade trip. I didn’t even have to sleep on the ground and it was still horrible. It rained the whole time and it was an environmental camp, so the food was horrible and they made you feel guilty for showering and everyone had stupid names like “Juniper”. It was like prison. Only worse, because there was no TV.

But just because I hate camp doesn’t mean I can’t watch other people go to camp on TV. And despite it’s serious cheesiness (the wolf in the woods? the word “sign” in the dumpster? please…) it was a pretty fun episode. The best things were that we got to see George and Poppy butt heads a little bit, Amber finally kissed George, and Alistair finally kinda-sorta made a friend. The fact that said friend mistakenly thought he was on ‘shrooms is beside the point. Alistair actually told someone that Chloe is his sister – her boyfriend, no less! – and that was great to see.

I’m loving the stuff with the kids, but I’m still not feeling the stuff with Dr. Rand and Wayne. I’m hoping that maybe her character will loosen up a bit, because right now she’s just too cold to be believable.

Does watching Huge bring up good or bad memories of camp for you?