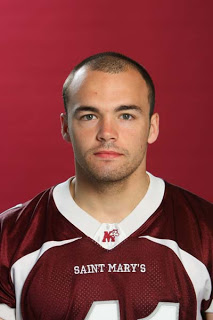 Huskies Take Care of Business; Pull Away From Scrappy Mounties in 2nd Half.
Steve Sumarah has seen his Saint Mary’s Huskies play a little too cocky for his liking on several occasions this season. Some AUS pundits say this over confidence and sense of entitlement cost SMU a victory in their season opener vs Saint Francis Xavier.
Sumarah made sure it didn’t happen on Friday night vs. last place Mount Allison Mounties.
The Huskies had their best start of the season, recovering an onside kick on the first play of the game, and scoring a touchdown on a 25 yard pass from Jack Creighton to Jahmeek Murray.
As the Huskies offence went to the sideline to celebrate and relax on the bench, Sumarah came over and delivered a firm message; “Too many mistakes out there!”
Sumarah was in no mood for sloppy football on this night, and his Huskies responded with arguably their finest performance of the season.
The Mounties would hang tough in the first half, racking up over 10 first downs on offence and attacking the Huskies with an excellent balance of run and pass.
But they could not stop the Huskie’s three headed monster running game, or Jack Creighton and his troop of talented receivers, eventually falling behind 44-18 by the end of the third quarter.
Craig Leger ran for 75 yards on 7 carries and the Jones brothers, Devon and Tristan, combined for 123.
Creighton threw for a staggering 438 yards, completing 24 passes to 8 different receivers. Murray had 6 catches for 132 yards and veteran Carl Hardwick caught 5 balls for 103 yards.
Place kicker Justin Palardy added a new chapter to his developing legacy, kicking 4 field goals to give him 56 for his career, tying an AUS record.
The Mounties were game in the first half. Led by running back Matt Pickett, and the short passing game of Quarterback Jake Hotchkiss, the Mounties accumulated 7 first downs in the opening quarter and took a 14-10 lead on a touchdown catch by Ben Stehr.
The Mounties would continue to move the ball in the second quarter thanks to all world receiver Gary Ross. Ross was all over the field at Huskies Stadium. Long passes, long runs after short passes, handoffs in the backfield, the dynamic Mountie’s receiver was doing everything.
But the Mounties were unable to punch the ball in to the end zone after putting together long drives, settling for a field goal and a rouge on the last play of the half.
On the other end of the field, the Huskies scored 2 touchdowns and a field goal to build a 27-18 lead as the tide slowly began to turn in favour of the defending AUS champs.
Gary Ross would finish with 11 catches for 130 yards, and Matt Pickett rushed for 116 yards on 21 carries for Mount Allison in defeat.
Akwasi Antwi led the Mount Allison defence with 8 tackles. Ryan King and Devon Hicks combined for 9 tackles for the Huskies.
The teams finish off their home and home series next Friday night in Sackville, NB.
Opinions and Observations
Gary Ross is the real deal. Previously I had only seen him on Eastlink, but Friday night I watched him from the sidelines and he is the total package. Great hands, speed, toughness, and durable; it’s a shame he has played his career in national obscurity with the Mounties…….Speaking of great receivers, Carl Hardwick is one for the Huskies. He’s not blessed with the same physical gifts as Ross or teammate Firass El Fatah (very impressive looking athlete), but Hardwick is tough as nails, runs great routes, and has terrific hands….Mounties RB Matt Pickett took a vicious hit at midfield just before the end of the half. QB Hotchkiss spun away from big David Dominic when it looked like he was going to get hit hard from behind. Hotchkiss threw a pass across the field to a waiting Pickett who was getting lined up by Jeff Zelinski. Pickett caught the ball and began to turn upfield, and Zelinski delivered a bone rattling hit that brought the Huskies crowd to their feet. Give credit to Pickett, he got up right away and walked off the field while suggesting to the crowd that the hit had no effect. One of the hardest hits I’ve ever seen at Huskies Stadium…… Mounties Head Coach Kelly Jeffrey had choice words for officials during the game from the sidelines. Jeffrey was very upset with the lack of holding calls on the Huskies offensive line. After consecutive calls on #20 Matt Kenny for roughing the passer and pass interference, setting up the Huskies with a first and goal, Jeffrey could be heard yelling, “…(QB Jack Creighton) is getting 7 seconds in the pocket and not one holding call!”. Certainly Kenny’s back to back penalties was the key moment of the 1st half, and was the beginning of the end for the Mounties…….Attendance was announced at 3200. Great crowd, very vocal and excited. However, the student section could probably do without the kid on the megaphone, taunting the Mount Allison players on the sidelines. It’s a good idea, but the drunken ramblings of a 20 year old who thinks he is funny is more annoying to people in attendance than the visiting players…..After the rematch with MTA next weekend in Sackville, the Huskies travel to Mcgill on October 17, followed by the highly anticipated re-match with the undefeated X-Men at Huskies Stadium on October 23rd. St FX has a trip to Acadia and a home game vs. Bishops before then, so they should come into Halifax still undefeated for a game that will go a long way in determining which team finishes 1st, receives a bye, and hosts the AUS championship.