Home / Life / I Choose to Love Him

I Choose to Love Him

He wasn’t my type, I thought.

A big bear of a man, he was physically much different than the man I thought I had loved before. He was kind, and attentive, and clearly wanted to be around me.

So different from the life to which I had become accustomed.

He told me that I’d probably break his heart, but he liked me anyway. He called me when he said he would call, our voices tangling across hundreds of miles in the dance that is getting to know each other in a long-distance courting. It was, actually, an old/new-fashioned type of courting, with him sending me email messages telling me that he was thinking about me, and never making me wonder how he felt. He laid his cards on the table, plainly, and took the chance that I would brush them to the floor with a careless swipe.

Like many couples, we have had discussions that led to heated arguments that led to slamming of doors and harsh words. The niceties that accompanied dating are sometimes forgotten. We sometimes take each other for granted and assume the worst when we should give each other the benefit of the doubt. Sometimes, I want to walk away, at least long enough to cool my temper.

But still, we stay.

And we stay because of this: I choose him. He chooses me. We choose to stay. Over and over. 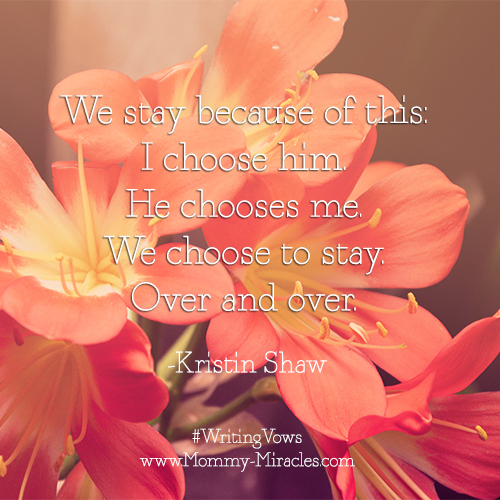 At our wedding, the pastor (my father’s oldest brother) said to us, “Love is a verb. It’s a choice you make every day.” I thought about his words, in that moment, and paused for a moment to let them sink in. Falling in love is easy. Staying in love takes work.

My parents have been married for more than 45 years. They argue, nag each other, and still kiss goodbye every time one of them leaves the house. They have had their share of pinnacles and valleys in their relationship, riding wave after wave and feeling the peacefulness of the lull between crests. My husband’s parents are much the same: married for more than 40 years, they exhibit a sweetness together that makes me smile as I watch them interact. In both marriages, the story is the same; they have had times that they thought that they weren’t going to make it over the next wave. They thought about getting off the surfboard we call marriage to jump onshore and walk on their own.

Instead, they rode the next swell and discovered that they could easily make it through another. And they got closer to each other instead of further apart. This doesn’t happen by chance; it happens by choice.

It would be easy to choose to get off the roller coaster ride and walk away. In fact, many people do. Having been through a divorce myself, I know that it’s not a decision to take lightly, but in some cases, it must be taken. Only you can decide what to do when a huge boulder crosses your path, and you’re not sure how to navigate it. No one can tell you how to proceed, because it’s going to be a different answer each time.

Sometimes it just takes one of the parties to move a little closer to the other to find that they were on the same path all along. Perhaps they couldn’t see through the brambles of everyday stress, or the pain of infertility, or the humiliation of financial worries. Perhaps the fog of doubt clouded their way. I know what that feels like.

And to that, I strive to wait until the fog clears. I want to cut away the brambles with a scythe instead of cursing their existence. I wish to see clearly ahead on this path of marriage I have chosen with my husband. We’re building a family together, and it’s important. Our son needs us to try every day and to choose each other every day, to the best of our ability. It takes both of us trying to make that happen.

It’s our families who take the brunt of our stress – the people closest to us, the ones we can trust to love us. It’s not easy to grit our teeth when we want to lash out. No one does it perfectly. I know I don’t. Sometimes, I want to scream when I am feeling misunderstood, or snapped at, or doubted by my husband. I know he feels the same way sometimes. And in my first marriage, our relationship was as stable as a clown shoe on a banana peel, ready to slip out the door at any moment – his frame of reference was a set of parents who didn’t speak to each other after their divorce when he was two years old. He thought that leaving was the answer to any discord. I know this time, in my second marriage, I have chosen a mate who believes strongly in the commitment of our relationship.

I am no relationship expert; I am, however, older and wiser having made it to the other side. I know more about what it takes to stay together, through trial and error. There is a husband waiting for me at home choosing me, even when I drive him crazy.

We’ll ride the next set of waves together and keep choosing to love. It’s worth staying through the valleys. 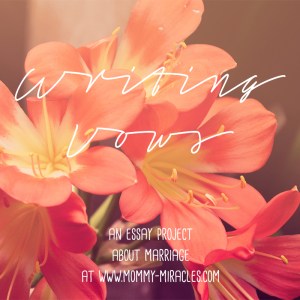 The post I Choose to Love Him appeared first on Mommy Miracles.

Take a look at these criteria to help you pick a brilliant casino. The research...