L-A: To be honest, I’m not sure which Jenner is which (I’m still iffy on 75% of the Kardashians as well) and this is just one of the many signs I’m Of A Certain Age.

Because I have concerns about this dress. Because you guys, WHERE ARE HER UNDERWEAR? 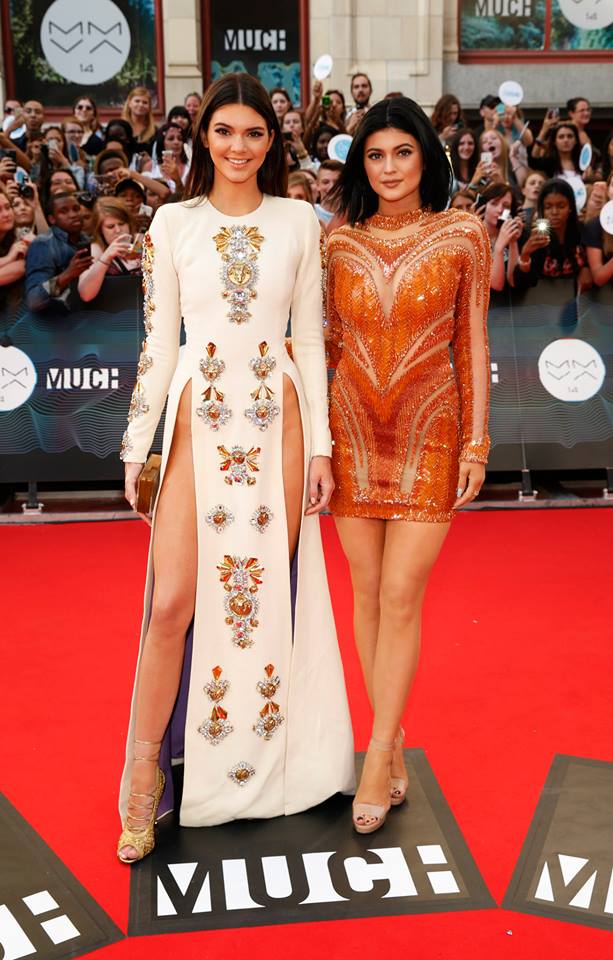 Is she wearing any? If so, what kind of cut would they have to be? Are they somehow attached to a belt around her waist? And if she’s not wearing any, is she concerned of a major wardrobe malfunction? How much tape is involved? And does that tape hurt? Worth the pain I suppose, because that’s a lot of people to accidentally show your hoo-haw off to.  Also, if she is commando, is she cold? Because I feel like it wasn’t that warm in Toronto yesterday evening (at least it wasn’t that warm about two hours outside of Toronto).

On the other hand, she has done the seemingly impossible: made the dress on the right look like a conservative prom dress from rural Utah (sorry to any readers from rural Utah who are into sequins and provocative dresses). The dress on the right is a totally a figure-skater inspired micro mini (even the nude shoes make me think of tan figure skates) and makes Jenner on the right look like she’s about to head into the long program to compete. But next to the Jenner who is Most Likely to Go Commando at an awards ceremony, everything is in it’s place and covered up. So that’s a win for at least one of the Jenners.

Finally, can we put the Angelina Jolie Red Carpet Leg to rest? There must be a better way to show off your shoes and all the lunges you’ve done at the gym. Maybe try a shorter dress if showing off your leg is a priority.

(Having said all this, if we weren’t so close to see her nether-regions, I probably would be on board with this dress existing. I currently need it to justify it’s existence).

I Have Concerns: Kylie or Kendall Jenner
https://haligonia.ca/i-have-concerns-kylie-or-kendall-jenner-94605/