Life has a funny way of working out sometimes. Funny might not be the right word, here. “Shitty” is probably more appropriate. While I pride myself in not resorting to curse words when I’m trying to express myself, some situations simply do not call for eloquence.

Last Wednesday I sent my boys to daycare and I noticed how it was just like any other day, except it wasn’t. It was the last local first day of school before my biggest boy goes off to school next year. It was the first day that my boy would be amongst the biggest and most experienced kids at his daycare.

As we walked through our daycare door, I heard the sound of a crying baby. I knew that sound. That was the sound of unfamiliar places and people. I knew what her parents had been feeling as they dropped off their child for one of the first times, too. I looked at my husband knowingly. It was nice to walk into a place that our kids loved, instead of fretting all day about whether they would fall in love with it. Those transition days are hard, but we were far away from them.

On Friday, our world was turned upside down when we received a call at 10am telling us that our daycare had been shut down and we had no childcare for our children, effective immediately.

I’m not going to go into the hows or the whys. I refuse to let myself fall into the anger and negativity that I know surrounds this situation. When you’re left in a shitty situation, you have to do what you need to do. It is upsetting enough as it is without engulfing yourself in anger.

Friday was awful. It was worse than awful. Friday was a downright shitty day. The phone call at 10 rocked my world and left me feeling hurt and confused. I hid myself in the office bathroom, fielding calls from my husband who had our van and was on his way to pick up the boys. I could not stop crying. And my cover was dashed when my husband called me from the Bluetooth system in the car. My sobs rang out over the vehicle’s sound system for my children to hear.

Sometimes Mama isn’t brave at all, boys. Sometimes Mama thinks about how hard things are going to be for us all. I think about how Gavin loves his teachers and talks about them daily. He needs to say goodbye to them at the end of each day and is sad when he doesn’t get that chance. He wants to show them his new things, and his old things that they already know all about. And I think about Cameron, and the friends he has grown up with. I think about the opportunities that he has been given through his daycare – opportunities to learn and grow and discover and be active, all for a price we somehow seemed to manage. I think about these people who have helped me raise my children. I know that their love for my kids runs deep, because I’ve seen their concern and I’ve heard their praises and I’ve watch them love my boys. And suddenly, this Mama feels very overwhelmed that this has all just been torn away from us.

We were lost. Our kids had nowhere to go, so they came with us. Dan dropped them off outside my office and as I opened the van door, Cameron unbuckled gave me a big hug and a kiss. “I’m sad that daycare broke the rules, too, Mommy.” Gavin just looked at me with his big concerned brown eyes. I tried to hold it together.

I spoiled my kids that day. We had lunch in the food court where they got three different juices between the two of them because someone couldn’t make up his mind about what juice he wanted. And those juices weren’t even touched because they drank my smoothie instead. After the hot dog and the chicken nuggets and the fries, we got frozen yogurt, because the day called for it, and we all needed a reason to be happy.

Cameron told me a few times that he wished he was still at daycare, colouring and doing crafts. He shed no tears, but he told me how sad he was that daycare broke the rules.

We all process the shit differently.

There’s so much to sift through. So many emotions, so many events. I don’t even know how to write about it. There’s no simple way to conclude this and I realize that in so many instances in life, there’s just no simple way to go through conclusions. They’re hard and awful in the best of situations, and often, you don’t even get that. You get daycares shutting down with no notice and you get kids who feel hurt and confused and who wake up crying and you have to spend money you don’t have while wondering if you’ll be reimbursed. You feign bravery while your heart breaks to leave a crying child at a new daycare. You feign nothing as you watch with pride a big brother comforting a little one.

Conclusions are not easy for me. I get to the end of something and I want to draw it out, or I’m simply confused over how to wrap it up nicely. But when it is finally pulled all together, conclusions bring a resolution. In writing, you can resolve things when the time is right. In real life, we’re still waiting for everything to settle. But we’re getting there. And even though this situation hasn’t quite fully concluded yet, it has brought us to a new beginning.

It looks like we had a first-day-of-something this September after all. 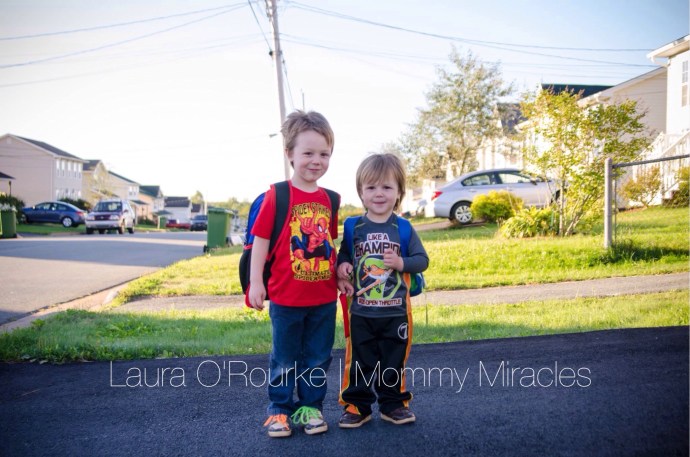 The post I Suck at Conclusions appeared first on Mommy Miracles.

I Suck at Conclusions
https://haligonia.ca/i-suck-at-conclusions-97535/