Finally comes the book that has been 30 years in the making. Jean Auel wowed the world with her Earth’s Children series starting with The Clan of the Cave Bear in 1980. Now comes her long awaited 6th book The Land of the Painted Caves.

The series features Europe during the Upper Paleolithic era, circa 30,000 years ago, and the co-existence of Cro-Magnons and Neanderthal . Auel did excellent research into this time period and features detailed information about botany, herbology, herbal medicine, archaeology and anthropology. But what draws the reader back for more is the social dynamics and yes, the romance of the novels.

The Valley of Horses (1982) has Ayla cast out of the Clan of the Cave Bears and she has been forced to fend for herself. Alone for three years she learns to tames and raise animals, which include Whinny, the horse and Baby, the cave lion. In this book that Ayla meets Jondalar, who is also Cro-Magnon.

The Mammoth Hunters (1985) has Ayla and Jondalar traveling to another region and are introduced to another clan The Lion Camp Of Mamutoi. There they introduce the tribe to the skill of domesticating animals. There is also a lover’s misunderstanding which complicates life for the newly formed couple.

The Plains of Passage (1990) have Ayla and Jondalar traveling to his homeland of the Zelandonii.

The Shelters of Stone (2002) have the couple reaching the ninth cave and preparing to marry and have a child. But of course to keep the novel interesting life is never simple for them.

The sixth and final installment (though there has been some controversy on whether is the last novel) presents 25 year old Ayla becoming the spiritual leader of the Zelandonii.

So there you have in brief the story of the Earth’s Children series. If you are looking for other novels of a similar theme you might enjoy the following:

Stonehenge, 2000 BC
by Bernard Cornwell

People of the Wolf*
by W. Michael Gear & Kathleen O’Neal Gear
* my favorite and book one of the “People’s series”.

The Blessing Stone
by Barbara Wood 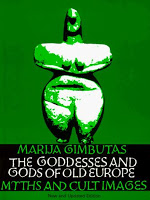 The Goddesses and Gods of Old Europe
by Marija Gimbutas

The Illustrated History of Early Man
by John Haywood

So there you have it, a series of books that have both been printed in the past and are about the past. Enjoy!