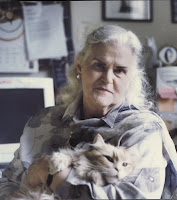 Science Fiction writing has lost one it’s Grandmasters. World renowned and award winning author Anne McCaffrey (1926-2011) passed away at home in Ireland on Monday Nov 21st.
A true superstar in the field, she was the first woman to win both an Hugo and a Nebula award. She was awarded the designation of Grandmaster in 2005 by the Science Fiction Writers of America. She was also inducted into the Science Fiction Hall of Fame in 2006.

Best known for the Dragonriders of Pern (M) series, originally a trilogy, but later expanded to include several spin off series. Her son Todd and fellow science fiction author Elizabeth Scarborough were collaborators in the more recent titles beginning in 2003.
NoveList describes her writing as a mix of science fiction and fantasy. The pacing quick and the tone is described as atmospheric, romantic, suspenseful, upbeat with a strong sense of place.

“All genres have their grand old dames… crime fiction still has PD James, romance had Barbara Cartland. In the fantasy and science fiction field, we were lucky indeed to have Anna McCaffrey.

“She was too modest to regard them as classics, but classics of the genre are what they became, outlandish planet-threatening mycorrhizoid spores and all. In a genre whose audience is often stereotyped as geeky males, in which its female authors often still feel it is a boys-only club when it comes to reviews of their work and airtime, McCaffrey was up there with Robert A Heinlein, Arthur C Clarke and Jack Williamson. She’ll be deeply missed.” – author Stephen Hunt