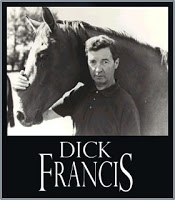 Horse racing and mystery writing legend Dick Francis passed away at age 89 at his home in the Cayman Islands. (Obituary)

Although best known for his novels, Francis was also a jockey, an RAF fighter pilot and journalist. Francis was born into a racing family and it was his intention to become a jockey and a trainer. He had a more than successful career as a jockey winning hundreds of races. Perhaps his most famous race was one that he lost. He was riding Devon Loch, the Queen Mother’s horse, at the Grand Nationals in 1956. They appeared poised for a easy win when Devon Loch collapsed 60 m from the finish line.

After one too many injuries, Francis turned to writing and had, ultimately, over 40 bestselling novels to his name. He wrote about the glamorous world of horse racing. His heroes were at first jockey/detectives and later other folks associated with the racetrack. His heroes were always likable and his books contained a wealth of detailed information about racetrack life.

His latest book, Even Money, was the third he co-authored with his son Felix. Ned Talbot, a bookie, thought that his father had been killed in a car crash many years ago along with his mother. A man claiming to be his father approaches him at the track. He is then attacked and killed. Ned learns that this man may have killed his mother many years before.