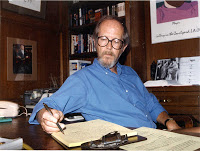 Acclaimed author and screenwriter Elmore Leonard (M) has passed away at the age of 87.

Recently awarded a lifetime achievement award, a Distinguished Contribution to American Letters Medal, by The National Book Foundation, presenter Martin Amis portrayed him as “a literary genius who writes re-readable thrillers. ” I think that is a rather apt description.

NoeveList describes him as such:

“Elmore Leonard’s fast-moving crime writing houses a colorful array of sleazy characters spouting inspired, street-smart dialogue in vividly described locales such as Detroit, Miami and Hollywood. Elmore brings his lean, direct narrative voice to his Western novels as well. His often wry tone suits both genres equally. Sudden eruptions of fierce violence keep readers on edge and off-balance. His fast-paced writing focuses on lifelike, idiosyncratic characters — in pursuit of a big score, or of each other — heading toward a final collision that not all will walk away from. Start with: Hombre (M).” NoveList

His most recent novel is 2011’s Raylan (M), book three of the Raylan Givens series of novels.

“Deputy U.S. Marshall Raylan Givens first appeared in Pronto and Riding the Rap. Then Raylan, as portrayed by actor Timothy Olyphant, became the hero of the hit Fox television series Justified. Now Leonard lays down another splendidly grimy crime yarn featuring his law-enforcing protagonist. Raylan finds himself drawn into a bizarre set of cases involving drug dealers, moonshiners, coal-mining conglomerates, and the urban legend-like harvesting of human organs. Yes, siree, Harlan County, KY, ain’t no sleepy bunch of tree-lined hollers no more. Raylan, true to character, is willing to allow cocky law breakers enough leash to choke themselves. The bolder ones wind up in front of his pistol. VERDICT Leonard lovers will find the fascinatingly twisted personalities common to his fiction here, along with memorable trademark Leonard moments of humor, grit, and greed. Raylan will play well with his current popularity and won’t disappoint fans of the books and the show.” – Library Journal

He also created quite a buzz among writers in 2001 with his famous “10 Rules of Writing” series of articles in the NY Times, later published as a book.

He was also well regarded in Hollywood, where many of his novels became popular films, such Get Shorty, Jackie Brown (Rum Punch) and 3:10 to Yuma.

May he rest in peace.