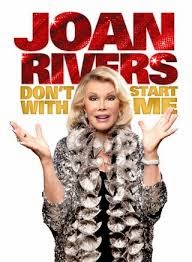 Joan Rivers has passed away at the age of 81. Rivers – comedian, actress, TV host, fashion critic, diva, author and reader. She is instantly recognizable, both in presence and by her raspy voice.

She was direct and honest and never apologized for her beliefs. Her career spanned six decades beginning with her mentor Johnny Carson. Over the years she performed on stage, in movies, hosted her own talk shows and made the red carpet the highlight of celebrity award shows.

And of course Joan Rivers was a writer. I read one of her books, in fact. In 2009 she wrote her first and only novel Murder at the Academy Awards: a red carpet murder mystery with Jerrilyn Farmer which New York Daily News described as “Miss Marple in Manolos, Bond with a boob job….”

Rivers’ most recent book was Diary of a Mad Diva. “Following up the phenomenal success of her headline-making New York Times bestseller I Hate Everyone…Starting With Me, the unstoppable Joan Rivers is at it again. When her daughter Melissa gives her a diary for Christmas, at first Joan is horrified—who the hell does Melissa think she is? That fat pig, Bridget Jones? But as Joan, being both beautiful and introspective, begins to record her day-to-day musings, she realizes she has a lot to say. About everything. And everyone, God help them. The result? A no-holds-barred, delightfully vicious and always hilarious look at the everyday life of the ultimate diva. Follow Joan on a family vacation in Mexico and on trips between New York and Los Angeles where she mingles with the stars, never missing a beat as she delivers blistering critiques on current events, and excoriating insights about life, pop culture, and celebrities (from A to D list), all in her relentlessly funny signature style. This is the Diary of a Mad Diva. For the first time in a century, a diary by someone that’s actually worth reading.” publisher

And Joan Rivers, the reader. Christian Science Monitor reports that Joan Rivers was an avid reader whose love was European history – pre Napoleon. Who knew?!