Reginald Hill (M), prolific and much beloved crime writer, has died at the age of 75. Hill was born in the north-east of England and, on his website, had this lovely thing to say about his childhood, “By the time I was three we had moved west to the county then called Cumberland, now by the dictate of bureaucracy Cumbria, which contains the Lake District, where you’ll find the loveliest scenery in the country. I grew up there, went to school there, and generally came to the conclusion that the world was a happy place full of nice people.” Reginald Hill was a teacher until he made the brave move to full time writing and has somewhere in the range of 40 books in his legacy.

He is perhaps best known for his Dalziel and Pascoe (M) series. Dalziel and Pascoe are Yorkshire detectives first introduced to us in A Clubbable Woman (M). One detective is gruff and fierce and the other is soft-spoken and educated. Over the course of the 24 or so books in the series they age and complement each other’s world views. Hill’s books are character-rich, fast-paced and with intricate plots. Hill was not afraid to be experimental as well with Dalziel and Pascoe investigating a murder on the moon in One Small Step (M). 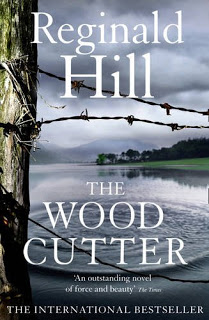 His most recently published book is a stand-alone novel The Woodcutter (M). “Wolf Hadda’s life has been a fairytale. From humble origins as a woodcutter’s son, he has risen to become a hugely successful entrepreneur, happily married to the girl of his dreams. But knock on the door one morning ends it all. Universally reviled, thrown into prison while protesting his innocence, abandoned by friends and family, Wolf retreats into silence. Seven years later prison psychiatrist Alva Ozigbo makes the breakthrough. Wolf begins to talk and under her guidance gets parole, returning to his rundown family home in rural Cumbria. But there’s a mysterious period in Wolf’s youth when he disappeared from home and was known to his employers as the Woodcutter. And now the Woodcutter is back, looking for the truth — and with the truth, revenge. Can Alva intervene before his pursuit of vengeance takes him to a place from which he can never come back . . . ?” publisher
Reginald Hill was the recipient of the 1995 very prestigious sounding Crime Writer’s Association Cartier Diamond Dagger for Lifetime Achievement.