I don’t buy a lot of magazines – I don’t know why, it’s just not my thing. Last year, I bought two: The New Yorker Summer Fiction issue and the Walrus Summer Fiction issue. I bought both issues for this summer too. Like last year, I’ll carry them around in my purse all summer, reading on sunny park benches, flipping through their ever more worn pages, until at the end of the summer they will go on the book shelf in a great disheveled heap.

My interest in these summer fiction issues got me thinking about the literary magazines that we carry at the library. If you’re an avid reader, literary magazines can be a great way to find out about new authors, locate quirky gems from established favourites and (as many of these journals feature essays, and poetry as well as fiction) dip into writing styles that you don’t normally read. If that sounds like something that would interest you—take a peek at one of these:

Granta: British literary magazine Granta has been around in its current form since 1979, but the Halifax Public Libraries just started receiving it recently. From their website: “Granta does not have a political or literary manifesto, but it does have a belief in the power and urgency of the story, both in fiction and non-fiction, and the story’s supreme ability to describe, illuminate and make real. ”

That sounds pretty heady. What might interest you more is to know that content has come from writers like Bill Bryson, Peter Carey, Raymond Carver, Nadine Gordimer, Salman Rushdie, Zadie Smith, Jeanette Winterson and tonnes more. Granta is also in the business of publishing stand alone books like last year’s The Granta Book of the Irish Short Story. A recent issue of the magazine focused on new writing from Spanish authors: The Best of the Young Spanish Novelists is available from the library in both English and Spanish.

McSweeney’s: About 3 times a year, someone who oversees shelving at the library will come to me and say “what are we supposed to do with this?” That’s because, about 3 out of every 4 issues of Timothy McSweeney’s Quarterly Concern come in elaborate packaging that just doesn’t suit library lending or shelving. There was the issue that came with a deck of cards and a comb, the issue that was just a bag of junk mail flyers and my favourite the one that recently came in a box elaborately designed to look like a human head that contained a bunch of books and leaflets, some postcards and an uncut roll of fortune-cookie fortunes.

But don’t think that McSweeney’s is all gimmick and no substance. From their website: 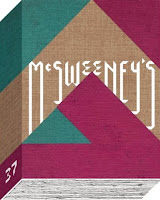 “McSweeney’s began in 1998 as a literary journal, edited by Dave Eggers, that published only works rejected by other magazines. But after the first issue, the journal began to publish pieces primarily written with McSweeney’s in mind. Since then, McSweeney’s has attracted works from some of the finest writers in the country…” Authors who have been published in McSweeney’s include Denis Johnson, Joyce Carol Oates, Jonathan Lethem, Michael Chabon, Wells Tower, and Miranda July. 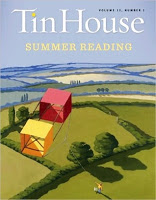 Tin House: American quarterly Tin House is described on its website as “the singular lovechild of an eclectic literary journal and a beautiful glossy magazine”. Publisher Win McCormack said of the effort, “I wanted to create a literary magazine for the many passionate readers who are not necessarily literary academics or publishing professionals.”. In publication since 1999, Tin House “offers an artful and irreverent array of fiction, nonfiction, poetry, and interviews as well as columns on food and drink, out-of-print and underappreciated books, and a literary crossword puzzle.” They also have a monthly podcast, which they describe as “irreverent and well-intentioned”.

The library also carries a number of Canadian literary journals: Antigonish Review, Canadian Literature, Dalhousie Review, and The Fiddlehead are all available in the Reference Department at the Spring Garden Road Library.

Due to a quirk of the cataloguing process, you can’t request individual issues of literary journals through the catalogue from home. But staff at any branch can help you request a copy of a specific issue of one of the circulating magazines.

In Praise of Literary Magazines
https://haligonia.ca/in-praise-of-literary-magazines-42157/