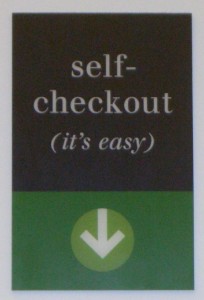 I think we’ve all been in this scenario. You’ve got a cart full of groceries and are eying the magazines and candy in the check out aisle when you realize you’ve left all your re-usable canvas bags in the car. D’oh! It means you’re either going to get dinged 5 cents a plastic bag or fork out another 99 cents to get more canvas ones (that you’re likely to forget in the car again).

I’m fortunate enough to work around the corner from a Pete’s Frootique. At my workplace I keep at least one canvas bag tucked away in a desk drawer and another in my laptop bag. As a pedestrian and a person who uses public transit as a primary form of transportation, I have to plan such grocery shopping expeditions out in advance. I even use listingly or Evernote to keep track of my grocery and to-do lists.

We like to think that it was granola BC that started the trend of making canvas bags mandatory but, in fact, it was a small town in Manitoba. In fact, it was only a month prior to their policy that San Francisco became the first city in North America to ban the use of plastic bags in grocery stores.

Even in Europe there’s a 5 cent surcharge for plastic. The difference there, that Cokebaby and I noticed on our last trip in the summer is that they still have a free option of paper bags.  We’ve begun to use our paper NSLC bags for composting. It was only recently that Nova Scotia jumped on the eco-band wagon in terms of canvas bags.

Last week, Cokebaby and I attempted to use our canvas bag at the self-checkout lane and I have to admit this is where it became problematic. I have no issues with the bag-your-own groceries option when it’s for a small amount of groceries (1-2) canvas bags. However, the system doesn’t really seem equipped to handle non-plastic bags. Every second item scanned came up with a “please wait for attendant” notice. I’m not sure if it was the fact that the canvas bag kept slipping from the bag holder or because the weight calibration was off. As much as I think this is a great idea in theory, there are definitely hiccups that need to be worked out for it to not be frustrating.

Now merging canvas bags with other stores, that’s another story altogether. I often get deer-in-headlights stares from the clerks at stores that don’t offer re-usable bags. Sometimes, they attempt to leave the bagging to me. As if the canvas bag is some foreign concept.

What do you think?