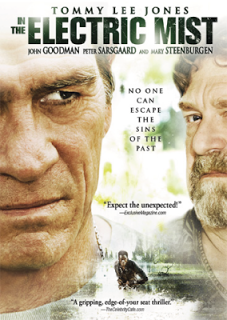 Mystery author James Lee Burke‘s series character Dave Robicheaux is for many readers, the quintessential tough nosed, hard drinking, self destructive detective.  A policeman who sometimes plays a little outside the rules in order to bring justice to his world, to right the wrongs inflicted on the vulnerable and innocent.   This character obviously resonates with readers as the series is now up to 17 titles.

Fans of Dave Robicheaux should be excited to learn that their is a new film version of their favourite detective, to be played by Tommy Lee Jones.
Interestingly, there was a previous screen version of Dave Robicheaux, played by Alec Baldwin, in the film Heaven’s Prisoner.  Consensus among readers and watchers alike was that Alec Baldwin was not believable as the gritty Robicheux. Tommy Lee Jones should fare much better.
The motion picture adaptation of In the Electric Mist with Confederate Dead, book six in the series, has been released on dvd and is now available to be borrowed.

In the Electric Mist with Confederate Dead - film adaptation
https://haligonia.ca/in-the-electric-mist-with-confederate-dead-film-adaptation-2198/