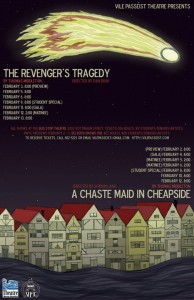 Things that make me happy:

1. I attended Vile Passéist Theatre‘s trivia-night fundraiser and my team (we were called Harold Pinter vs. Christopher Plummer) won a round! This was through no actual help from me, besides my stirring and inspirational Roxie Hart impression.
2. Their two new productions premiere THIS WEDNESDAY. Ahh!

I chatted with Colleen MacIssac of VPT a  bit about what went into pulling together A Chaste Maid in Cheapside and The Revengers Tragedy, two early modern plays by Thomas Middleton, and found that putting on performances such as these is no walk in the park (or, in Middleton speak, no revenge plot again your mother’s lover).

The plays have a combined cast of 29 and crew of 13. Since October they’ve been getting together to rehearse up to five times per week (!!!). Despite their minimalist mandate, VPT used Latin coaches, fight coaches, costume designers, set and props designers, a music director, a trailer animator, and dance coaches to craft their performances into Jacobean perfection.

Working with such a large cast and crew and squeezing full-time job hours into part-time availability must have been kind of maddening, but it really shows the passion and commitment these folks have to their work, and besides… both plays seem to require a bit of madness.

If you want to see either A Chaste Maid in Cheapside or The Revenger’s Tragedy, check out VPT’s Facebook Page for information on showtimes and tickets.

We asked folks to tell us their favourite playwright for a chance to win two tickets to your performance of choice. A random draw produced:

Kirk (good choice of playwright, sir)–way to win! Thanks to everyone else who entered–I have a good little list, now, of folks’ work who I need to check out.

In the Middleton of the Night
https://haligonia.ca/in-the-middleton-of-the-night-32385/