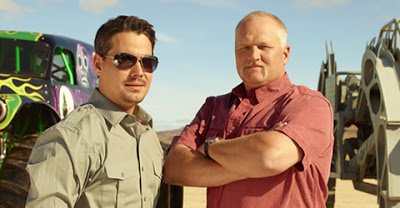 If you’re as big a reality TV junkie as I am, I’m sure you can appreciate how totally psyched I was when I was offered the opportunity to join a media conference call with none other than Survivor:Redemption Island winner and Around The World in 80 Ways star Boston Rob.

Like, for realsies, guys. I was super nervous. No wonder everyone thinks I’m a nerd.

So Rob joined me and some other TV bloggers/journalists to talk about his new HISTORY show, Around the World in 80 Days, starting October 2nd. On the show, Rob and Dennis Anderson (creator of the monster truck Gravedigger, or so I’m told) will circumnavigate the globe using many different types of transportation. Like, we’re talking everything from fighter jets to ostriches here. Check out the preview below:

Obviously, Rob’s experiences playing Survivor four times and The Amazing Race twice provide a great background for a show like this. “I think the race gave me a foundation for traveling internationally,” Rob said. “The main thing I learned with Survivor is that, you know, it’s a social game, and life is a social game. And whenever you travel and – around the globe, you know, you’re immersed in different cultures with different people. And at the end of the day you have to be able to communicate and interact with them.”

However, Around The World will be an entirely different experience. “The main difference was that with Survivor and the Amazing Race was competing to win $1 million. There’s no $1 million prize at the end of this show. It’s more about the journey.”

Rob said some of the most memorable parts of the journey were a hot air balloon ride over the Serengeti during the Great Migration and using a helicopter to go water skiing. “We tried to use different forms of transportation that was indigenous to the areas that we were in. So, for example, when we were in Botswana in Maun, which is the donkey capital of the world, we got a couple of donkeys and raced them. And likewise when we were in Dubai we were driving Ferraris and speedboats. So we tried to keep with that motif throughout the entire series.”

Rob said one of the hardest parts about doing the show, which took ten and a half weeks to film, was missing his family so much. He and his wife Amber have two daughters. So what’s next for them? Producing, Rob says. First of all, he’s not interested in playing Survivor again. “I mean, I’ve gotten everything I wanted to ever out of Survivor,” Rob said. “And look I won the show — that was my ultimate goal — my wife won the show. So as a contestant I won’t be back on Survivor.“

“Amber and I have talked about starting our own production company. Luckily we have the resources and the experience of two of the best in the business. So I think that’s where the future will ultimately end up.”

Now, I was lucky enough to get the last question in on the call, so I’m just going to paste in that whole conversation for y’all. Try to imagine my voice slightly trembling with excitement/nervousness, okay?

Operator: We’ll now take our next question from Jill Mader with Couchtime With Jill.

Jill Mader: Hi Rob. Thanks for talking to us today.

Rob Mariano: You got it.

Jill Mader: I wanted to know, you’ve been so many places now doing Survivor and The Amazing Race, And now this show, if there’s somewhere you could go back, maybe like when your kids are a bit older or just go back in general, what’s the one place that you would really love to return to?

(I know, I know, that’s a terrible run-on sentence. I was nervous!)

Rob Mariano: I went to New Zealand. I went to Queenstown and I thought it was absolutely gorgeous. It’s the adventure capital of the world. It’s where I first bungee-jumped. It’s where there’s camping, the shuttle, the jet. And I just think that whole island is gorgeous and I would love to take my family. I talk about it all the time with Amber and the kids. I’d love to take them down there to see that.

Additionally there’s a couple places that I would personally like to go that I haven’t gone to. I want to go down to the Southern Ocean in Antarctica and see the whales and the icebergs and Tasmania, that whole area of the world I haven’t really explored yet.

Jill Mader: Cool. And just one other question — you talked about not going on Survivor ever again as a contestant. If Jeff Probst were to decide to just do his daytime talk show and not go back as host is that something that you would maybe consider?


Rob Mariano: That’s something Jeff would have to call and ask me to do…

Jill Mader: Well I certainly would like to see it. Thanks a lot for talking to me.

And there you have it! I know I’ll be watching Rob’s new show when it debuts, are you guys going to check it out?