L-A: Writing this post is hard, because all I can think about is how much Glee annoys me.  Mostly Lea Michele pisses me off. I’d say I look forward to her graduation, but you know that they’ll invent a school that’s an acceptable alternative to a school in NYC. Probably call it the Lima Prestigious School for the Performing Arts. Because if it annoyed me that Rory Gilmore chose Yale over Harvard, you can be damn sure that’ll be the final nail in the Glee coffin for me.

Writing this post is also hard because when I stop thinking about Glee, all I can thing about is a Tumblr that Jo sent me tonight.

It’s called Is Ryan Gosling cuter than a puppy? 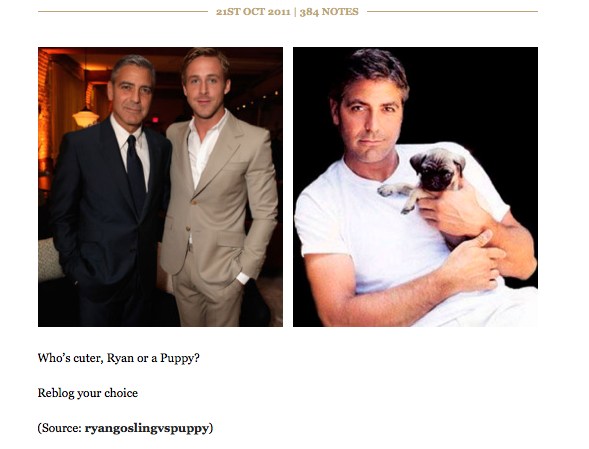 hint: the answer starts with a G and rhymes with Osling.

Normally I’d save a Gosling tumblr for a Friday, but this couldn’t wait.

But it felt a little cheap to just give you a favourite. So, based on the suggestion from Jo, I present our most ridiculous idea yet:

Is Ryan Gosling Cuter Than Shoes? 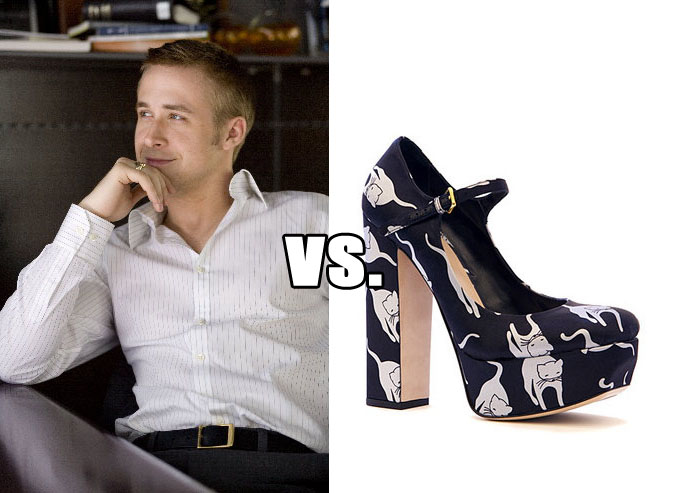 I’ll let you be the judge. But quite frankly, as much as I love shoes, I just might love Ryan Gosling more. And if we’re really going to be frank, I’d much rather have too many Ryan Goslings. Or have a Ryan Gosling problem in the hall closet (as opposed to our current shoe crisis).

p.s. despite her original leanings towards the Other Ryan, Jo has seen the light and chosen this Ryan.

p.p.s. You could probably make a dozen or more mad libs or a tumblrs from the following statement: “Is Ryan Gosling cuter  than _____?”

Is Ryan Gosling cuter than…?
https://haligonia.ca/is-ryan-gosling-cuter-than-48249/