Okay, enough avec le high school French (even though I have actually taken French in university, it never quite sticks).  So, I am un grande fan de la film Amelie. Then again, who wasn’t a fan of Amelie? Audrey Tautou is beaucoup de cute and director Jean-Pierre Jeunet makes Paris into a candy coloured wonderland. Oh, and there were gnomes. (cute garden gnomes as opposed to creepy looking garden gnomes. there is a difference).

I liked the movie so much that for a time, I wore my hair a la Amelie. I cannot comment on if having such short bangs was well-advised, but it was the first and only time that I have brought a photo to a hair salon and asked for a cut. (Thankfully, I did not fall victim to the “Rachel” cut of the mid-90s).  But what of this video? What about fashion? Well, check out this new ad for Chanel No.5/short film, directed by Jeunet and starring Audrey Tautou, called Train de Nuit:

I’m not completely in love with her hair in this video, but she does have some très chic outfits while she is running around Istanbul. The one that I really love is what appears to be a pantsuit that she’s wearing at the end of the video. This is a big deal as I am not generally a fan of the pantsuit (and by pantsuit, I’m thinking one piece pantsuit). I assume she’s wearing Chanel, but I have gone through S/S ‘09, Cruise 08/09 and 09/10 (I love that this collection is called cruise. Can you even imagine Karl Lagerfeld on a cruise?), and the fall ‘09 ready to wear and haute couture: but nothing resembling that outfit. Not that I’d ever be able to wear such an outfit, but I am in love with it all the same.

Moving along…this video is blogworthy not only because it is for Chanel, but we’ll soon be seeing Audrey Tautou in the film Coco Avant Chanel: 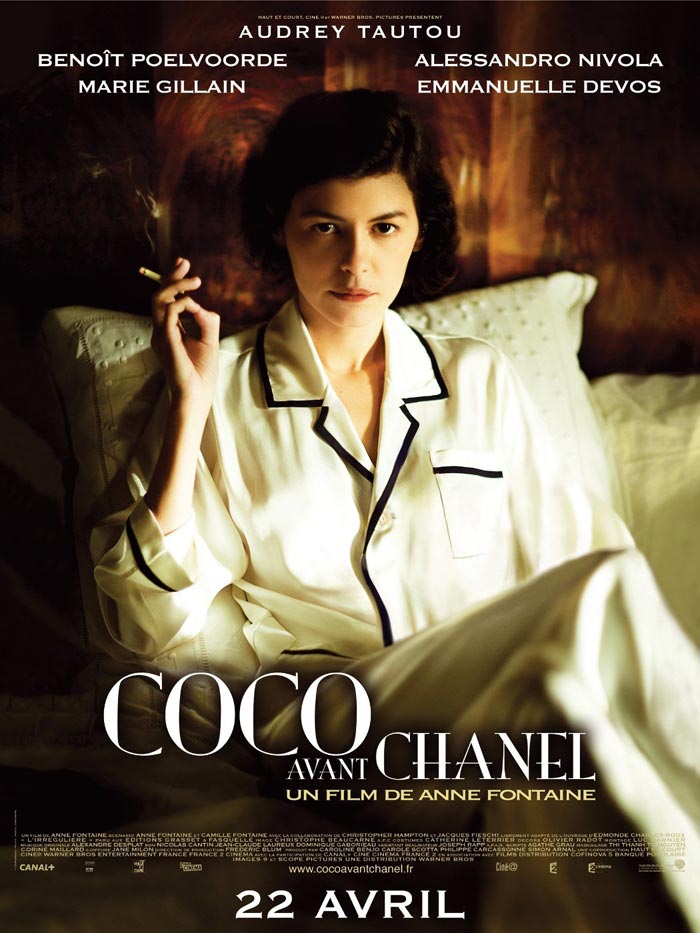 According to Vanity Fair, Karl Lagerfeld made her a classic chanel suit. I hope she got to keep it.

It’s already been released in France, but no word yet on when we get to see it. (My dream lineup for the Atlantic Film Festival includes Coco Avant Chanel and The September Issue). If your French is better than mine, you can check out the trailer for the film here.

AllyG: That is such a coincidence! That is my dream line up as well. In the same dream I walk the red carpet with Leo DiCaprio (just to make sure he finds his seat ok…I am having a BABY with my HUSBAND). The best thing about this post is that it could be a Favorite Friday post! Favorite on Tuesdays!! How outlandish! Seriously though, perfume commercials are my absolute favorite to watch. Do you remember the scene in Zoolander? Where Ben Stiller’s character watches his merman commercial with his coal miner father and coal miner brothers? I cried I was laughing so hard. The sad thing is, it was pretty realistic for a perfume commercial. Ok, it was a fake Aveda ad but close enough.

I checked out YouTube to see if there was a commercial for my “scent” (snort..”scent”…snort!) and there is indeed! Apparently the perfume I wear is for ten year olds or those who weigh 10 pounds.

I absolutely love the Chanel commercial with Nicole Kidman? It falls into the “So cheese it’s good” category (we need a tag for that category), similar to a NKOTB video. You know what I’m talking about.

The perfume ad that gives me the worst case of embarassment cringes is for Escape by Calvin Klein. Watch…I dare you not to cringe…

This is not to criticize the lovely Milla Jovovich. I love her. Particulary because she gained 60 pounds while she was pregnant. I’d post a picture, but that would be cruel. That would be like someone posting a picture of me in mid-August, sitting in the wading pool I bought at Winners for $9.99. No, I’m not kidding. It’s awesome, and I love it. Me, my wading pool and an US magazine. Ahhhh. Perhaps I’ll make a merman video of my own. Hmmm??? Hmmm?

P.S. Because I love you, here’s some goodness. No need to thank me. No need.

p.p.s. L-A here. NKOTB have requested no embedding on their newer videos. But here’s some classic NKOTB cheese for you. Also a good example of embarassment cringes:

AllyG: I cannot believe NKOTB does not wish to have me PROMOTE THEIR NEW JAMS.