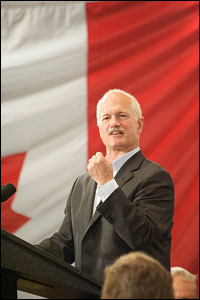 Geoff Regan, Member of Parliament for Halifax West, issued the following statement upon learning of the passing of the Honorable Jack Layton, M.P., Leader of the Official Opposition:

“I was deeply saddened by the news of the passing of Jack Layton, Leader of the Official Opposition and the leader of New Democratic Party of Canada. Jack was a formidable opponent and great parliamentarian. His leadership on a multitude of issues inside and outside the House of Commons will leave a lasting legacy on the Canadian political landscape.

Like all Canadians, I was hoping that Jack would return to the House of Commons and the forefront of Canadian political debate.

Our prayers and thoughts are with his wife, Olivia, and his family at this difficult time. On behalf of my wife, Kelly, my staff and the people of Halifax West, I wish to offer sincere condolences to Jack’s family.”

Jack Layton will be missed
https://haligonia.ca/jack-layton-will-be-missed-42686/