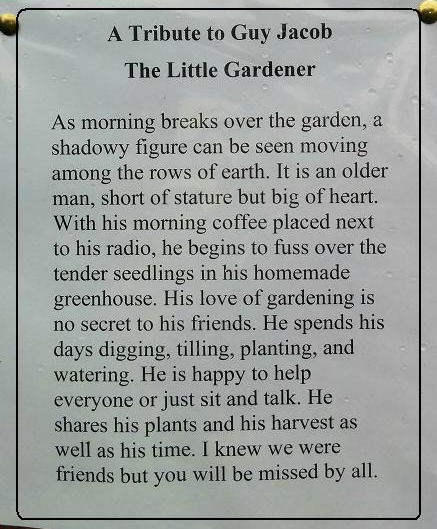 A tribute to Guy is posted on the door of the community garden shed.

A community in North end Dartmouth is mourning the loss of one of their most active gardeners.

“Guy lived for the garden,” said friend and fellow-gardener Mary Smith.  “You’d see him in there from 7:30 in the morning until dusk.”

The garden is lush green space in Dartmouth North where people come together to chat and work the soil. Over twenty members have garden plots that produce fresh produce and beautiful blooms. 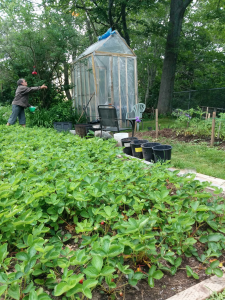 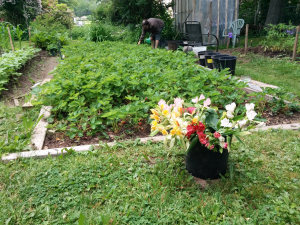 Guy Jacob, 69, of Dartmouth, NS and formerly of Petit-Cap passed away suddenly on Thursday, June 25th, 2015. He was the son of Clara (Melanson) and the late Philippe Jacob.
Guy worked as a steel worker until his retirement. His favorite pastime was gardening.
He is survived by his mother Clara of Cap-Pelé, his daughter: Angèle Richard (Terry) of Trois-Ruisseaux; his two grandchildren: Ryan and Randy; six sisters: Georgette Landry of Amherst, N. S., Gisèle Doiron of Grand-Barachois, Patsy McFarlane of Kitchener ON, Delcia Gaudet (Claude) of Cap-Pelé, Linda Jacob of Trois-Ruisseaux, Shirley Vienneau (Laurie) of Saint-André-LeBlanc; three brothers: Ovila of Cap-Pelé, Normand and Gary all of Petit-Cap; as well as by several nieces, nephews and all his friends in Dartmouth NS where he resided for the past 20 years.
Besides his father Philippe, he is also predeceased by an infant sister Gilberte, two brothers: Romuald, Philippe Jr. (Joe) and his godchild (niece) Bonnie.
There will be no visitation. The funeral will be held at the Saint-Timothée Roman Catholic Church in Shemogue on Wednesday, July 8th at 1:30pm. Interment will be held in the parish cemetery. Cremation and funeral arrangements are under the direction of Frenette Funeral and Cremation Centre, Shediac (532-3297). Online condolences may be forwarded through our website at: www.frenettefuneralhome.com