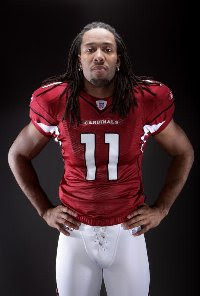 Cardinals Making A Believer Out of Skeptics…Except Me
Have to give props to Dave Lalande for picking the Cards on sunday. Can their miracle run contiunue in the Super Bowl vs the Steelers. No. But, it`ll be fun watching them try. Pittsburgh is not a team that routs their opponents, they just put you away slowly but surely. So the Cardinals should be within striking distance for most of the game.

I heard one analysis say that Arizona has had a very fortunate run to the big game, and I have to agree. I said throughout the season that the NFC south was the most overrated division in football, so watching them beat Atlanta and Carolina was not surprising (although I did not pick them in either game). As for the Eagles, I think Philly lost that game more than the Cardinals won it.

Philly seemed to think they were just going to show up and win in the first half. They put it together in the second half but Mcnabb missed on too many passes. Although, Larry Fitzgerald is a man among boys, Curt Warner is a very calming presence for the team who still throws the best short pass in the NFL (the type of pass that Mcnabb struggles with), and that winning touchdown playcall was excellent by the Offensvie Coordinator.

I’m taking the Steelers by 10 for all the reasons I’ve talked about at length in previous posts.

Dave Hodge Commentary on Fighting
Dave Hodge will never be confused for a sports reporter of the common man. His persona has always been that of an aloof intellectual who would rather sip wine and watch Golf then drink beer and watch a hockey game. But his elegant commentary about fighting in the NHL, aired on TSN a couple nights back, was bang on.
Basically Hodge asked for fans who enjoy fighting in hockey, to simply admit that they want fighting to stay in hockey because they like watching guys fight. Don’t try to intellectualize or play the purist game by saying things like; “Fighting is ingrained in hockey culture”, “If you don’t have fighting the sticks will come up”, or my favorite, ” It protects the star players” (insert Dave Semenko reference here).
Those who think fighting should be banned will respect your opinion much more if you just tell the truth; You like watching hockey players fight. Period.

TSN Just Posted the Transcript of Hodge’s Commentary on the Website, here it is in it’s entirety.
“For better or worse – and I happen to think it’s always better to discuss contentious issues than to ignore them – the “fighting in hockey” debate is raging again.
The only trouble is, there’s nothing new in the arguments from either side.
But I’d like to propose a change that might make the dinosaurs and the granola eaters – as they were labeled on the weekend – agree on something.
I want the fans of fighting to be just that – I want them to admit that a hockey game with a fight is better than one without – simply because it’s more entertaining.
I want them to say they want the guy from their team to beat up the guy from the other team because it makes them feel good.
I’d like to hear that they want fighting in hockey because it’s too long to wait for the next UFC telecast.
I have no argument for that – you like it, I don’t – let’s carry on as hockey fans.
What I’m tired of hearing is the stuff that attempts to explain the “benefits” of hockey fights, or the “need” to continue them.
They’re part of hockey, we are told. So was the red line, until it was removed.
Without fights, players would swing their sticks at each other. Not if they wanted to avoid a long suspension and the possibility of jail time.
You must be able to protect your skilled players. You mean, if you couldn’t do it with fists, somebody might try to body check a goal scorer? I’d like to see more of that.
Players need fighting as an outlet. What about players with visors? The pro-fighting lobby itself says they shouldn’t fight. So what’s their outlet and what’s the argument when they’re all wearing visors?
Hockey would become less popular and profitable without fights. Ah, but for some reason, customers are willing to pay more money for playoff games than they pay for regular season games and it’s the playoff games that seldom contain fights.
Tell me you want hockey to have fights – don’t tell me hockey needs to have fights. And we’ll all get along better.”
Raptors Receive Failing Grade
Steve Aschburner wrote this about the Raptors in his column on cnnsi, where he dished out mid season grades to all 30 NBA teams.
Toronto Raptors: It’s not easy to earn a grade this harsh. You would need to underachieve dramatically, abruptly fire your recent Coach of the Year (Sam Mitchell), have a showy offseason move (trading for Jermaine O’Neal) blow up in your face, turn your lone superstar into a cranky finger-pointer who might want out, cope badly with a key injury (Jose Calderon), run off a string of losses and drown in trade rumors a month before the NBA deadline. Ladies and gentlemen, your … Toronto … Raptors! Grade: F