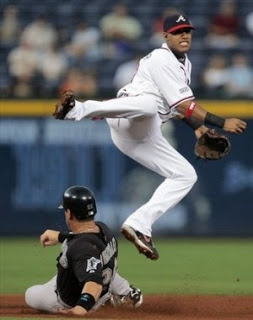 The athletic Yunel Escobar is the newest shortstop for the Jays

Alex Anthopolous (hereafter known as AA, because I am lucky I spelled his name correct once) doesn’t seem to know how to take time off.

Wednesday, saw AA use the last day of the All-Star break to continue addressing the organization’s weaknesses and add to the young core he has been developing. He traded shortstop Alex Gonzalez, along with minor leaguers, Tim Collins and Tyler Pastornicky to Atlanta for shortstop Yunel Escobar and pitcher Jo-Jo “The Psychic Network” Reyes.

Gonzalez was added this past off-season to fill the organization’s greatest need. Known primarily for his glove, Gonzalez has had a tremendous year at the plate so far. He has 17 HRs and 50 RBIs to date in the 2010 season, is currently fifth in the American League in extra base hits. Gonzalez’s bat and defense will be a great asset to the Atlanta Braves, currently leading the NL East.

In Escobar, the Jays are getting a younger shortstop that has had some issues with his previous team, but has the talent to be an effective player for Toronto, both in the field and at the plate. Since coming into the league Escobar has been criticized for his lack of effort and occasional disagreement with management. Much of this was overlooked as in his three seasons with the Braves, Escobar has a career .291 average, and last season set career highs in home runs (14) and runs batted in (76) while hitting .299 with a sterling .377 on-base percentage. This year has seen him struggle with a .238 batting average and no homeruns.

With his production down and the Braves holding a playoff spot, Escobar became expendable. Toronto is obviously hoping that like Adam Lind and Aaron Hill, Escobar will return to his 2009 form following the proverbial change of scenery. Add to that, Escobar is six years younger than Gonzalez, and the move makes a sense for a team looking to build a strong young core for the future.

This may only be the first of a number of similar moves for the Jays. Earlier in the week, it was reported that the Blue Jays were making relievers Kevin Gregg, Scott Downs and Jason Frasor available. There will be no shortage of playoff contenders looking to add depth to their bullpen for the stretch run.

Lyle Overbay, a free agent following this season, is liking available as well. After a horrible start, Overbay has begun to swing the bat better in the last couple months and his steady defense could make him a useful player for a team looking for a good glove at first or maybe even a lefthanded bat off the bench.

American League homerun leader, Jose Bautista could also find himself with a new address before the end of the month, but AA may not be as anxious to part with Bautista. Bautista is signed to a reasonable contract and has also played well defensively in the outfield. He is a useful player that can provide power and fill-in at third if necessary, once Travis Snider returns. Bautista could be moved, but I think it will a take a decent return for the Jays to ship him out.