[My aunt who lives in Paris sent me a lovely little note recently: “I love your blog and the foodie sections in particular. I frequently make the Curried Cauliflower Soup that Kristen Pickett contributed—the tip of roasting the cauliflower first is brilliant and makes all the difference…” She wanted to share a holiday recipe and a lovely coincidental little story about a cookbook she discovered while living in Canada. Enjoy!] 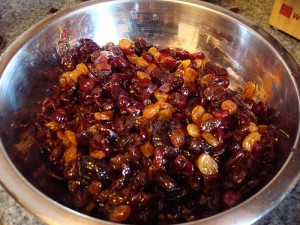 When I moved to Paris, one of the few books I kept from my Torontonian library is Marie Nightingale’s Out of Old Nova Scotia Kitchens, published in 1971. How did I get my hands on this book? Well, I bought it because of its quaint name and its reproduction of the recipes used by early settlers. It was the golden age of ethno-museums and pioneer villages.

I have tried many of the recipes, which are absolutely great. It also includes a short history of the multi-cultural settlement of Nova Scotia—from the rather unique perspective of the cooking pot.

The Micmac Indians taught the settlers how to hunt for bear in the winter (watch out for the tell-tale vapours out of their dens), how to make maple syrup and maple sugar cakes, which roots and plants were edible, corn, etc. The French were the earliest settlers and, accustomed as he no doubt was to the French tendency to poetize about food, Champlain said there was “none as tender as the moose meat (wherefrom we also made excellent pasties) and nothing as delicate as a beaver’s tail.” There is, however, no recipe for beaver’s tail.

Years later, the English in Halifax introduced English fare, which may explain our love for world food…But their desserts were not bad—they inaugurated family Sunday outings to tea-houses for indulgence in strawberries and cream or Strawberry Shortcake—Nightingale claims this was a precursor to ice-cream parlours.

German settlers were known for their excellent sausages, breads (“never would a Lunenburger turn a loaf of bread upside down for fear she would upset a ship at sea”), cakes…and of course sauerkraut. The New Englanders, fleeing the American Revolution, took up the farms of the unfortunate Acadians, and brought Thanksgiving Day with them, as well as more sophisticated recipes for clams and lobsters. The Irish brought with them “luscious potato pancakes, soda bread, corned beef dinners and Irish stews that ‘mother used to make’”. The Scots arrived with tons of recipes for oats, Haggis and Auld Man’s Milk (otherwise known as eggnog).

And finally the Blacks (Nightingale says that “43% of the Negroes in Canada live in Nova Scotia”—this was back in politically incorrect 1971—but I doubt that the statistic is still correct), who had come to escape slavery, brought with them exotic dishes they had elaborated down south, like black-eyed peas, chow-chow—a hot, spicy relish, skillet cornbread, cobblers (Blueberry Grunt), etc.

Anyway, I dig out Out of Old Nova Scotia Kitchens at least once a year at Christmastime because it has a fabulous dark fruitcake recipe. The French have a nice custom of fresh oysters or foie gras at the beginning of a Christmas or New Year’s meal, but they don’t really have a specifically Christmas dessert. Their Bûche de Noël or Christmas Log, is just a jelly roll decorated with heaps of icing to look like a log in the wintry woods. Anyway, this is the recipe for English dark fruitcake:

Mix in order given. Add baking soda to molasses and blend until molasses froths. Save out one cup of the flour to dust the fruit. Grease pans and line the bottoms with two layers of heavy brown paper and one layer of wax paper. Use one layer of brown paper and one layer of wax paper around the sides. Bake in a 275° oven. Test with a toothpick or straw. Wrap the finished cake(s) in a rum-soaked cheesecloth and wait for at least one or two weeks. Recipe can be halved.
Small cakes require about 2 ½ hours.

If you use entirely organic ingredients from the health food store, this recipe is actually quite healthy—assuming you don’t overeat! You can experiment with dried apricots instead of, or in addition to, cherries. Cointreau or Grand Marnier is less classic, but a little more subtle than rum and goes especially well with the fruit. You can serve this fruitcake with homemade lemon ice-cream (it’s Christmas after all), which is so easy to make, does not require an ice-cream maker and is sooo delicious that you will never buy ice-cream again. I swear. This is the recipe:

Grate the zest from 2 of the lemons (a special zest grater makes this very easy). Squeeze the juice of all 3 lemons into a small casserole – stir until the xylitol is totally dissolved. Add the lemon zest. Whisk the sweetened lemon juice and zest into the heavy cream. Pour into a shallow container, cover and freeze until firm (no need to stir to break up the crystals). This will take from 3-6 hours depending on your freezer. Transfer the ice cream in its container to the fridge 30 minutes before serving to soften slightly.