July kicks off with Canada’s birthday, so I thought it made sense to highlight a Canadian author for this month’s author birthday post. When I sat down to select author, I was overwhelmed by my choices and couldn’t pick just one. Celebrate Canada Day all month long with something by one of these great authors.

July 3 – Rohinton Mistry (1952). Born in Mumbai, Mistry immigrated to Canada in 1975. His novels are largely set in India, and are filled with history and family. In additional to winning the Giller Prize and the Governor General’s award, Mistry is one of a handful of Canadian authors to be picked for Oprah’s Book Club (A Fine Balance was a selection in 2001). 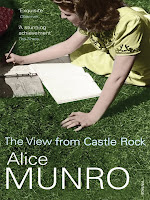 July 10 – Alice Munro (1931). If you like short stories, you likely already know Munro’s name. If you don’t like short stories, Munro may just be the author to convince you otherwise. Munro’s short stories are complete little worlds, rich in detail and character. If you’d like a taste, this month’s New Yorker fiction podcast features a recent story by Munro: Axis is read and discussed by American author Lauren Groff.

July 17 – Cory Doctorow (1971) For his 40th birthday, you should read one of Doctorow’s books! Largely known for his science fiction titles that blend technology, counter culture and a measure of political activism, Doctorow is also the co-editor of Boing Boing, a somewhat irreverent blog that focuses on technology and culture (and which also happens to be a great place to find reviews of Sci Fi and Sci Tech books).

July 18 – Margaret Laurence (1926 – January 5, 1987) Another Canadian great who seems to need little introduction. Two time winner of the Governor General’s Award for Fiction (in 1966 for A Jest of God and in 1974 for The Diviners). Laurence was born in Neepawa, Manitoba, the small town which is believed to be the model for the fictional community of Manawaka where much of her fiction is set.

July 28 – Malcolm Lowry (1909 – 1957): Okay, he was actually British but he lived and wrote in Canada for a time, even being awarded a Governor General’s Award for Fiction in 1961 for his novel Hear Us O Lord from Heaven Thy Dwelling Place. Best known for his novel Under the Volcano, a stylistically complex novel that tells the story of the downfall of a British man in Mexico which is set in a single day.