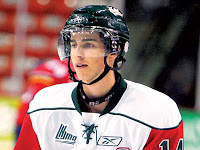 The Mooseheads came into Friday night’s match up against the Montreal Juniors with renewed energy after a flurry of action during the trade deadline.
The game saw the return of rookie Brent Andrews and Tomas Knotek from international tournaments, although neither had much of an impact on the outcome.
The Herd came out hard and almost capitalized on a number of chances but couldn’t convert.
The effort was not enough to hold off the Juniors who battled back and had a four goal second period that saw Moose goalie Mathieu Corbeil pulled from the game.
Newly acquired Delmas came in for relief to a loud cheer from the fans, only to let the first shot he faced right through him for the fourth goal. Eventually settling down, Delmas had a solid third period stopping a dozen shots.
Gerrad Grant finally answered back for the Moose with his 17th goal of the season late in the third period but by then it was too late for a comeback.
With Sawyer Hannay out of the line-up someone had to provide the grit and it was Dylan McGuigan who stood out with a number of big hits and strong physical play. 17-year-old Bradley MacDonald also had a solid night and showed streaks of the speed that scouts have been talking about.
The Mooseheads have now dropped six straight and are in tough to snap that streak with high flying Cape Breton and Moncton the next two teams on the schedule.
Announced attendance was just 4,890.
Three Stars
3rd – Tomas Knotek (HAL) – Worked hard for most of the game and added a helper on the late goal by Grant
2nd – Mathew Brenton (MTL) – Had one goal on the night and finished a +2
1st – Nicolas Chouinard (MTL) – Finished the game with a goal and an assist and was involved in most of the play for Montreal all night.
The last place Mooseheads (8-31-1-2) take on provincial rivals Cape Breton Screaming Eagles (24-15-2-3) Saturday, 7pm at the Metro Center
Henry Whitfield is an avid hockey enthusiast who covers all angles of the Halifax Mooseheads. Follow him on Twitter @HenryWhitfield for live game updates