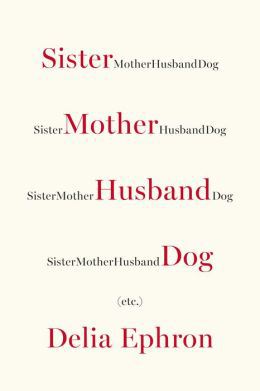 After so proudly reading fifteen books in 2014, I’m off to a slow start in 2015. I got stuck on a book of essays that I just wasn’t feeling, and rather than put it down for a while I just stopped picking anything up.

This always happens. I suppose it’s the consequence of having a stubborn personality – I refuse to admit literary defeat. (I will return to the essay compilation eventually.)

But last week, I picked up this book by Delia Ephron, and it was the perfect thing to break my reading dry spell. It’s funny, sweet and short. Delia is the sister and often collaborator of the late Nora Ephron. They worked together on many things I’ve loved, including the film You’ve Got Mail.

Delia wrote this book of personal essays shortly after Nora died, and her presence is felt in every essay. Sometimes I relate more to Delia (like when she writes of her obsession with the character of Beth in Little Women, and, specifically, her death – me, too!) and other times I relate more to how she describes Nora. But I always relate to how she talks about being a sister, because I am one.

These essays aren’t just for women, and they aren’t just for siblings. If you’re a writer, or if you wish you were a writer, there’s a lot to love in this book. She has so many interesting insights about writing, collaborating, writing essays vs. novels vs. films, and much more. She has a story about losing her website domain that is so much more clever than it sounds. She also writes about growing up with alcoholic parents, ones who could be both difficult and wonderful, in an honest and accepting way that I’ve never encountered. She writes about her pet in a way that I intensely relate to – though she is obsessed with her dog, and I my cat.

It’s a lovely collection, and a refreshingly easy read (that’s a compliment, NOT a condescension) after struggling with something very dry for the last two months. I highly recommend it!

What’s up next: The Dinner by Herman Koch