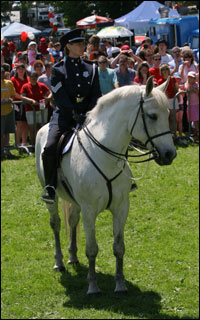 Justice the Protector was 23 years old when he passed away last month due to health complications.

Halifax Regional Police is saddened to announce the recent passing of its retired police horse, Justice the Protector.

He served with Halifax Regional Police from 1993 to 2006, and had five different riders.

He was retired on July 1, 2006 at HRM’s Canada Day celebrations and was adopted by a loving family who provided a home for him for the past three years.

Justice was very community-minded over the years.

He led the region’s Natal Day Parade for 12 years, participated in the Children’s Wish Foundation Parade and the Apple Blossom Parade as well as the Run for the Cure, Terry Fox Run, Kermesse, Special Olympics, Law Enforcement Torch Run and Police Week.

He also did segments on television for Court TV, Careers Television and Beyond the Badge, but was most famous for being photographed as he sauntered through the McDonald’s
drive-thru for a refreshing treat of ice cream!

Justice helped to keep the streets of HRM safe for over a decade, with his riders issuing tickets under the Liquor Control Act and Motor Vehicle Act.

Overall, he was a true asset to Halifax Regional Police and provided a great service to the citizens of HRM.