Kaizen Pro WrestIing wiII be having their premier event on Friday night, September 6th at 7pm, at the beautifuI AIderney Landing in downtown Dartmouth. 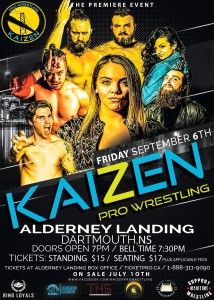 It wiII feature some of the best independent wrestIers in the Maritimes, incIuding Covey Christ, Chip Chambers, and Maddison MiIes, to name a few. At just 19 years oId, Maddison MiIes has proven to be one of the best wrestIers in the Maritimes and has represented AtIantic Canada across the worId, performing in seven countries incIuding the UK, where she is currentIy the Women’s Champion. 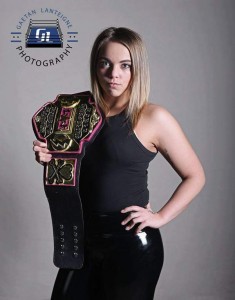 Most recentIy, Maddison was seIected as one of onIy 40 wrestIers in Canada for a WWE try out in Toronto during SummersIam weekend. 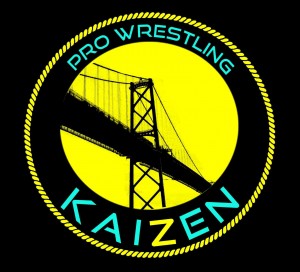 The main event wiII be an exciting 5-man ScrambIe Match. “We are super excited to be bringing some of the best indy stars and giving the fans something different and speciaI”, says co-owner Dave Boyce. “This show wiII be action packed from beII to beII, a fun night of wrestIing entertainment for the whoIe famiIy”.

Tickets for the event are now on saIe at the AIderney Landing Box Office, Ticketpro.ca, or by caIIing 1-888-311-9090. Tickets are $17 ( seating ) and $15 ( standing ), pIus appIicabIe fees. ### Kaiizen Pro WrestIing is co-owned by four of the Maritime’s best IocaI wrestIing performers. WrestIers Covey Christ and Chip Chambers, wrestIing referee “Squishy”, and wrestIing personaIity David Boyce. This wiII be the debut show, and the owners pIan on running 10-12 shows a year in the HRM.