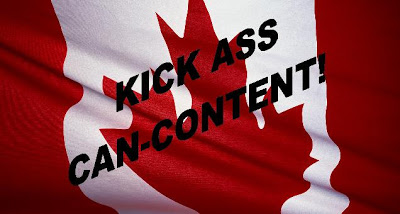 Alright, let’s keep the badass train rolling. This time we’re turning to the silver screen. Sadly few Canadian films get the budgets, exposure or screen time they need to succeed on their own merits. Thankfully however a few manage to make it to the big screen, largely through the support of government grants, domestic studios, foreign investors and even the odd personal bankroll. Occasionally Canada also gets some love from Hollywood and London, though this is somewhat rare. Easier just to dress them up and pretend the Canuck is a Yankee. Before we get back to the list, let me just remind you of the rules:

1. The story is set or takes place in Canada at least 50% of the time
2. The performer of a character is a Canadian/the majority of the cast is Canadian
3. A Character is Canadian/most of the characters are identifiably Canadian
4. The show is shot in Canada and/or is at least partially produced by a Canadian company 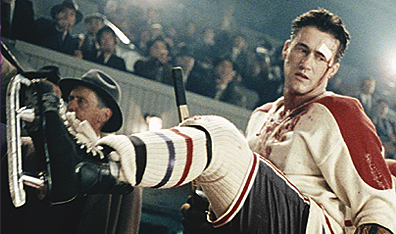 10. Maurice Richard (Roy Dupuis)- The Rocket
Tough, independent minded, hard-working, graceful with a killer shot and a quick right hand, Maurice Richard remains a hero not only to the Quebecois but to hockey fans, Montrealers and Canadians everywhere. Throughout his career Richard had to contend with not only the rigors of play back in hockey’s rough and tumble days but hostile Anglophones and Quebecois nationalists who were eager to turn him into a political hero as well. A fact he was deeply uncomfortable with. Throughout it all he played the game he loved his way. With guts, skill and a big bag of knuckles!
Can-Content Score: 4/4

9. Jimmy Tudeski (Bruce Willis)-The Whole Nine Yards
Can a man who hates living in Canada really be considered a Can-Con badass? Yes, because he fulfills two of the criteria…so quite you. When gangland hitman Jimmy “The Tulip” Tudeski decides to become a state’s witness and turn against his old boss he is forced to hide out in Montreal, where he befriends a neurotic local dentist named Oz (played by Canadian Matthew Perry no less). Shit inevitably hits the fan and Jimmy and Oz are forced to contend with waves of gangsters swarming The Tulip’s Canadian hideout. They do so with the appropriate amounts of bullets, fire and a naked Amanda Peet.
Can-Content Score: 2/4 (Production, Setting) 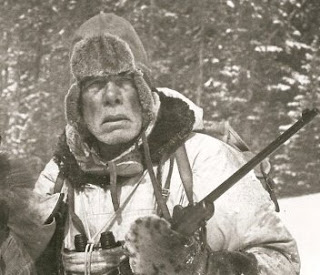 8. Edgar Millen (Lee Marvin)-Death Hunt
Canada has always had a reputation as a wild country, perhaps more so in the past than the present day. It is from that untamed past that our next badass comes. Sgt. Edgar Millen is one of those old school Mounties from popular myth. A grizzled, hard bitten, no nonsense mountain man who is far more comfortable in a snowbound forest than a five star hotel and has a near miraculous ability to track almost anything. In Death Hunt he takes on a outdoorsman of equal skill (played by the immortal Charles Bronson), who was forced into breaking the law by unfortunate circumstances. Not particularly pleased with his task but honour bound to do it, he tracks the fugitive through some of the harshest terrain Canada’s north has to offer and confronts him in a suitably bloody climax.
Can-Content Score: 2/4 (Character, Setting) 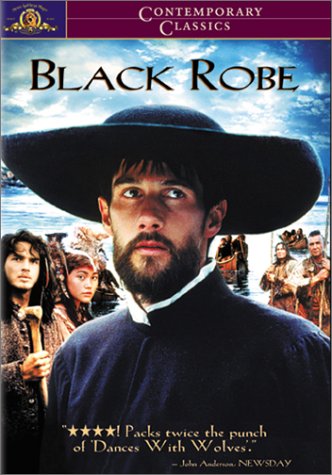 7. Father Laforgue (Lothaire Bluteau)-Black Robe
It’s hard to believe a non-violent, willowy French Jesuit could make it so high on this list but faith and suffering can make even the weakest person as had as iron. That is exactly what happens to the naive Father Laforgue in this Canadian indie classic. Beginning his journey through the frozen wilderness of Quebec an idealistic priest eager to convert the “ignorant heathens” of Canada, it doesn’t take long before his youthful enthusiasm fades. The friendly natives are largely dismissive and the hostile ones intend to do horrible things to him. Throughout his Heart Of Darkness-esque journey to a mist shrouded Huron village, he witnesses death, the harsh realities of life in the wild, suffers ruthless torture at the hands of the Iroquois, survives small pox and comes to realize that his glorious divine mission has inadvertently destroyed the very people who’s souls he intended to save. Despite all of this he carries on like a good little soldier of the mother church. Fueled only by balls and his belief in God.
Can-Content Score: 3/4 (Performer, Production, Setting) 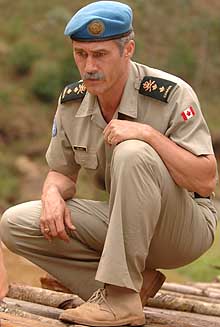 6. Romeo Dallaire (Roy Dupuis)-Shake Hands With The Devil
The second historical Quebecois on this list (both incidentally played by cinema’s go to French Canadian Roy Dupuis), Romeo Dallaire is best known in Canada as the beleaguered commander of the ill-fated UNAMIR mission to Rwanda. Abandoned by his commanders at the UN, largely ignored by the world at the time, Romeo was forced to try and prevent (later end) a massive genocide without using physical force. You’d have better luck trying to piss out a forest fire. Nonetheless, surrounded by madness and indifference Romeo, the consummate soldier, did his duty and tried his damnedest to save as many lives as he could with his paltry force of light infantry and unarmed observers. Unfortunately for him, even being relieved of his command wasn’t the end of his ordeal. He was forced to battle the inner demons which had followed him home as well. Arguably far more tenacious foes than any Interhamway thug. In this criminally underrated adaptation of Dallaire’s book, Roy Dupuis gives an eerie and pitch perfect rendition of the gruff old general. Romeo Dallaire, a badass for peace!
Can-Content Score: 3/4 (Performer, Production, Character) 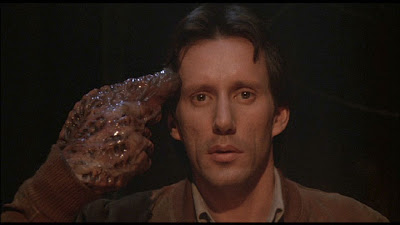 5. Max Renn (James Woods)-Videodrome
They say that T.V will rot your brain but I didn’t think they meant it so literally! In this non-stop mindfuck from the master of Canadian horror, David Cronenberg, James Woods plays a sleazy TV exec. An unlikely choice for a heroic badass to be sure but he’ll have to do because in Videodrome he is the best of a bad lot. Up against fascist plotters, government conspiracies, a mind altering television network and his own treacherous flesh, Torontonian Max Renn must throw himself whole-heartedly down the rabbit-hole in order to stop an insidious, creeping evil. Armed only with his wits, his quickly slipping sanity and the single most disgusting firearm in movie history. The question is, will he be able to succeed? Or even come out the other side alive?
Can-Content Score: 3/4 (Production, Character, Setting) 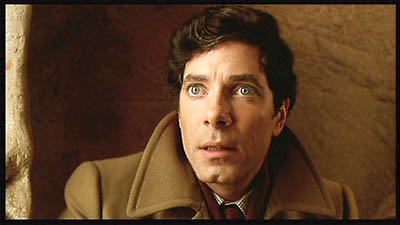 4. Cameron Vale (Stephen Lack)-Scanners
Yet another unlikely badass from a Cronenberg movie, the wide eyed Cameron Vale is proof that looks don’t mean shit when it comes to kicking ass. Behind his dumbstruck gaze rages an inferno of psychic energy which can barely be contained. Rendered nearly insane by an onslaught of telepathic noise, Cameron’s life only gets worse when he draws the attention of two competing factions. The evil defence megacorporation ConSec and a bloodthirsty league of drug pushing renegade psychic marauders led by a particularly powerful one named Revok (played by the method acting Canadian hard man, Michael Ironside). Wishing to be neither a corporate puppet nor a murderous terrorist, the unassuming Vale is forced to take on all comers in an orgy of exploding heads and telekinetic fire! Cameron Vale, the thinking man’s Can-Con badass.
Can-Content Score: 2/4 (Performer, Production) 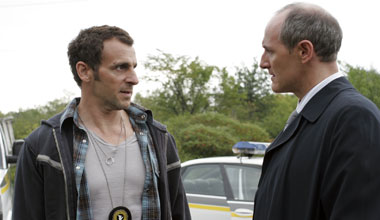 3&2. Martin Ward/David Bouchard(Colm Feore/Patrick Huard)-Bon Cop Bad Cop
A Can-Con two for one. Both of these characters come from the same film so I decided to just lump them together. Two Canadian detectives from two different cultures, the unlikely duo of Ontario Provincial Police inspector Martin Ward and Surete Du Quebec detective David Bouchard bicker constantly but find they have common ground which allows them to work together. They both like busty Montreal girls, they’re both bilingual and they both kick enormous amounts of ass. Ward is a stereotypical tightly wound Torontonian, who hides a bomb squad past and a badass streak a mile long under a smart combo of blazer and turtleneck. Bouchard is shambolic, unkempt, petty and unprofessional but takes care of business when the situation demands it. And it usually does. Especially while on the trail of a ruthless hockey themed serial killer. With their own unique skills, the two detectives prove nigh unstoppable once they stop arguing and focus on the task at hand.
Can-Content Score: 4/4 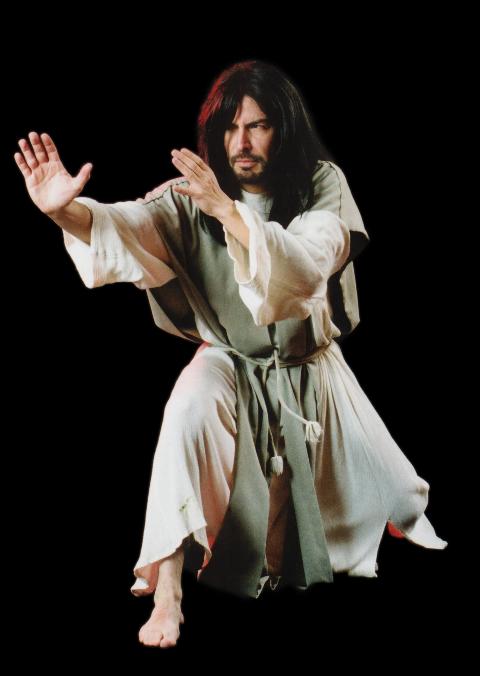 1. Jesus Christ (Phil Caracas)-Jesus Christ Vampire Hunter
Just let that title sink in for a second. Jesus Christ Vampire Hunter is more of a non-sequitur than a movie but it doesn’t matter, the main character is straight up, epic, wrath of God badass. The son of the Almighty has returned to Earth, only instead of healing the sick or bringing sight to the blind he roams a nightmarish version of Ottawa. Protecting lesbians from day walking vampires. Alongside legendary Mexican wrestler El Santo….This movie is undoubtedly one of the single most ludicrous things ever produced in Canada. And this is a country whose national film board seemed pretty much dedicated to funding mild altering cartoons during the 1970s! This movie is fucking terrible. But it is so terrible that through the Inverse Awesomeness Principle (also known as Chatterjee’s Llama) it is fucking amazing. I’m also pretty sure that you have to be high to fully understand how monumentally amazing this craptastic B movie masterpiece truly is. There you have it folks. Our number one big screen Can-Con badass is a hard-drinking, kung fu fighting Jesus who is pro-Gay. Sounds about right. Behold friends…THE GLORY!
Can-Content Score: 3/4 (Performer, Production, Setting)