The nominees for the 3rd annual Lane Anderson Award for Canadian science writing have been announced.

“Lane Anderson Award honours the very best science writing in Canada today, both in the adult and young-reader categories. Each award will be determined on the relevance of its content to the importance of science in today’s world, and the author’s ability to connect the topic to the interests of the general trade reader.”
Harry Thurston, an Atlantic Canadian author, has made it to this year’s finalists for his The Atlantic Coast: a natural history (M). 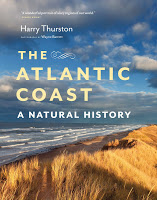 “The North Atlantic coast of North America — commonly known as the Atlantic Coast — extends from Newfoundland and Labrador through the Maritime Provinces and the Northeastern United States south to Cape Hatteras. This North Atlantic region belongs to the sea. The maritime influence on climate, flora, and fauna is dominant — even far inland. This is where the great northern boreal forests intermingle with the mixed coniferous-hardwood forests farther south and where the cold, iceberg-studded Labrador Current from the Arctic and the warm Gulf Stream of the tropics vie for supremacy.
Filled with stunning photographs, the book includes chapters on the geological origins of this region, the two major forest realms, and the main freshwater and marine ecosystems and also describes the flora and fauna within each of these habitats. Finally, it looks at what has been lost but also what remains of the natural heritage of the region and how that might be conserved in future.” publisher
Also nominated are:
Strange New Worlds: the search for alien planets and life beyond our solar system (M)
by Ray Jayawardhana

“We are living in an extraordinary age of discovery. After millennia of musings and a century of false claims, astronomers have found hundreds of planets around other stars since 1995. These discoveries have surprised us and challenged our views many times over. At the crux of the astronomers’ pursuit is one basic question: Is our solar system, with planets in circular orbits, gas giants in the outer realm and at least one warm, wet, rocky world teeming with life, the exception or the norm? It’s an important question for every one of us.
Astronomers expect to find alien earths by the dozens within the next three years, and to take their spectra, looking for telltale signs of life, before this decade is out. If they succeed, the ramifications for all areas of human thought and endeavour, from religion and philosophy to art and biology, are profound, if not revolutionary. What’s at stake is a true measure of our own place in the cosmos.” publisher
Cascadia’s Fault: the deadly earthquake that will devastate North America (M)
by Jerry Thompson

“The Cascadia Subduction Zone is a crack in the earth’s crust, roughly fifty kilometres offshore, running 1,100 kilometres from northern Vancouver Island to northern California. About every 500 years this fault generates a monster earthquake. There is roughly a thirty percent chance that it could happen again within the next fifty years. Or it could happen tonight. Without a doubt, the coming quake is one day closer today than it was yesterday.
The Cascadia Subduction Zone is virtually identical to the offshore fault that wrecked Sumatra in 2004, and it will generate the same type of earthquake, a magnitude nine or higher. It will send crippling shock waves across a far wider area than any of the California quakes you’ve ever heard about, slamming five cities at the same time: Vancouver, Victoria, Seattle, Portland and Sacramento. Cascadia’s fault will wreck dozens of smaller towns and coastal villages — and no one in these places will be able to call their neighbours for help.” publisher