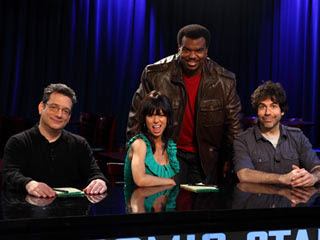 I’d never regularly watched Last Comic Standing before, but I figured this was the summer to watch. I’m a big Craig Robinson fan, and I liked the few episodes I saw back in the day.

Audition episodes are usually painful – I find it hard to get through the audition episodes of American Idol and So You Think You Can Dance – and Last Comic Standing was no different. Some of the auditions were just painful, others were…well, it’s hard to say. Some people made me laugh, but it’s hard to get a sense of what a comic is like from a 30-second snippet. I mean, I laugh at videos of cats playing the piano. If you can’t make me laugh at some point during your thirty-second spot than you don’t belong on YouTube, let alone network television. The trick is making me laugh during your whole show.

One big problem was that at first, auditioning comics only performed in front of a few judges and the crew. Such a huge part of stand-up comedy is interacting with the crowd (which is why I always sit in the back at comedy shows – just like in math class, I do not want to be called on) so performing in front of only a couple people seems awkward.

The showcase was a lot more interesting than the audition rounds, and made the two-hour show worth watching. Jacob Sirof stood out for me, as well as Chip Pope and Paula Bel. I also liked Christina Pazsitsky and Rachel Feinstein.

The show was definitely the kind of thing you’d tune into while, say, answering emails or painting your nails. That way you can kind of half-listen and then pay attention when you hear something funny. Overall, the show was worth watching because of some very funny moments and is worth tuning into – hopefully for only an hour each week.