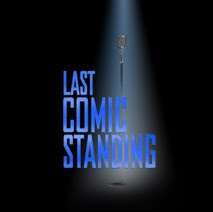 Last Comic Standing aired again on Monday night and once again Jonathan Thymius made it through. What is it with this guy? Is he going to win the whole thing? He was the first comedian that Craig announced was safe! The most shocking part was seeing how pretty his wife is. I’m baffled. Truly baffled.

The most disappointing thing was that Rachel Feinstein was eliminated. And it was really disappointing because she was left standing against Felipe Esparza, my second-most disliked comic on the show. Whhhyyyy? I liked Rachel. I thought she was hilarious. Felipe has just been stoned. This show is not going my way! OK, let’s look at the sets:

Jonathan Thymius
At this point, I’m assuming you know how I feel about Jonathan. I find him so dull that he can’t even hold my attention for more than 30 seconds. How does he keep making it through?
Roy Wood Jr.
I thought Roy was funny again this week – and there’s something about his voice that I just love. For me, he’s one of the most consistently funny comedians on the show.
Myq Kaplan
I started out not loving Myq, but since the live shows started he’s become one of my favorites. He solidified his favorite status with the hilarious song he did for his intro package. I also loved his set – the bit about how he has pictures pop up when someone calls of his own face reacting to the idea of that person calling was my favorite.
Tommy Johnigan
I was really happy that Tommy made it through, he’s another of my favorite comics left. His set this week was very funny – I liked all the stuff about babies.
Mike DeStefano
Parts of Mike’s set were funny, but he’s not my kind of comic. It’s not that I think he’s talentless – he’s just not my cup of tea. People who like him do not say things like “my cup of tea”, y’know?
Felipse Esparza
Oh, Felipe. As if I couldn’t dislike him any more, he was left in the competition instead of Rachel Feinstein this week. I hated his set, but I’ve decided to start rooting for him in the hopes it will get him eliminated. Come on Universe, work your magic!

Overall, I was disappointed with the show. Luckily, I still have some favorites left, like Roy Wood Jr. and Myq Kaplan. At this point, I’m hoping Myq will win. Who are you rooting for?