L-A: It started when I first saw them on the runway (well, pictures from the runway). I think it was spring 2011. There’s on pair in particular, but I can’t find them. But this Derek Lam number does the trick. 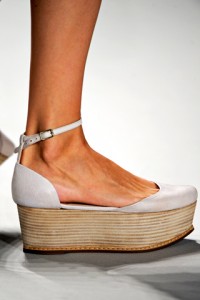 And the first thought to come to mind when I saw these was: orthopedic nightmare.

Yes, they looked like something I’d see in a catalogue for nurses uniforms or on the feet of someone elderly and in need of serious foot support and possibly a lift in just one shoe. And somehow this inspired designers. And then, naturally, the trickle down happened and now we have  a very ugly trend. And so, I’d like to examine said trend. And then ask that we all agree to bury this trend along with our crocheted vests, bodysuits with highwaisted tapered jeans and other questionable fashion choices.

1. Ralph Lauren: not horrible, but still kind of lame. 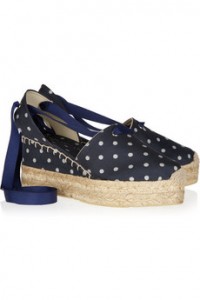 Not hideous, no. I can’t tell if I hate them because they are sort of a flatform or because they’re totally an espadrille and I have an unreasonable hate on for the espadrille. But these shoes with the extra flat inch exist because others do. 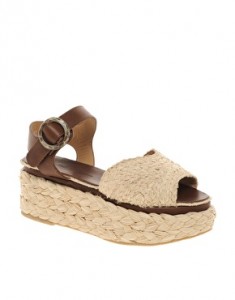 You know that rope that would be on homemade swings and kind of rough up your hands? Or was used to look all rustic and shit on Survivor? Yeah, well they made shoes with that rope. And charged you half a month’s rent for it.

3. Tory Burch: what happens when a pair of Toms have babies with espadrilles. 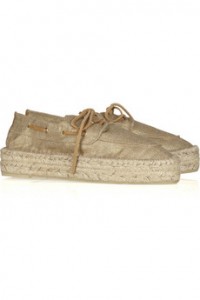 Shit son. I deal with TOMS because at least they do good things. You can justify spending $50 to $100 because they’re sending a pair of TOMS off to some shoeless child. But these? Not exactly glamorous or jet set as Net-a-Porter describes them. Instead they’re $175 for gold coloured linen that will probably rip off the too heavy bottom. And if they don’t? You still have an ugly, clunky shoe.

4. Prada: What happens when shoe designers get drunk. 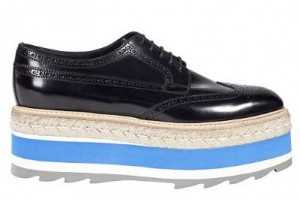 And this is what happens after a few too many jaegerbombs at the office party.

Picture it: You’re drunk and you can’t sleep and you’re surrounded by shoes and shoe glue. You have one of those ideas that seem like genius when you’re drunk. Like singing Taylor Swift at karaoke. When you wake up in a puddle of drool, with hazy memories of doing an ass drop on top of the speakers (and possibly singing Taylor Swift at karaoke), you’re  clutching the remains of a few different pairs of shoes. Jim from accounting’s wingtips are glued to Susan from HR’s espadrilles which are in turn glued to ironic Skechers of Jill from marketing, that have been in her closet since 1998. And how do you explain this monstrosity to your boss? And your shoeless co-workers? You tell them you’ve just created a brand new flatform and you’re going to charge $650 for them. And boom! You sell out of this nightmare and laugh at the women who bought them and buy the office a round of jaegerbombs.

Let’s not and say we did: flatforms
https://haligonia.ca/lets-not-and-say-we-did-flatforms-56763/