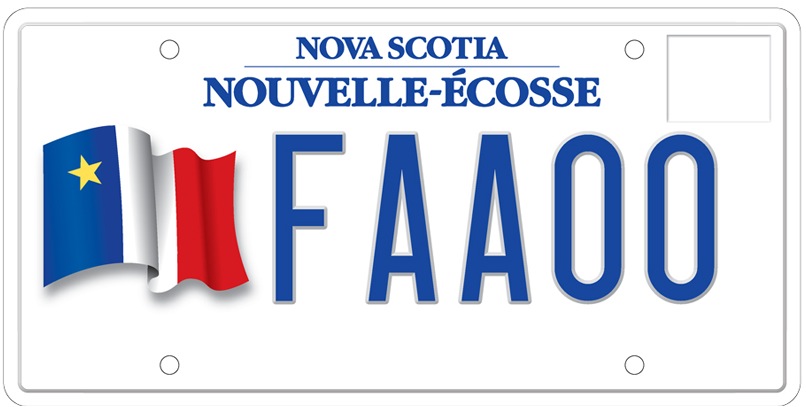 Nova Scotians can show pride in their Acadian heritage by choosing a new licence plate now available at Access Nova Scotia and Registry of Motor Vehicle offices.
The Acadian flag is featured on the new licence plate that was launched today, Jan. 9, at the Access Nova Scotia Centre in Lower Sackville by the province and Fédération acadienne de la Nouvelle-Écosse. The plate design was chosen after consultation with over 1,500 Nova Scotians last summer.
"This licence plate reflects Nova Scotia's proud Acadian heritage and allows Nova Scotians to celebrate the Acadian and francophone culture in the province," said John MacDonell, Minister of Service Nova Scotia and Municipal Relations. "The Acadian Flag plate is optional for anyone who wants to purchase one for use on their vehicle."
The plate will be issued, by request, to passenger and light commercial vehicles up to 5,000 kilograms. An application form and standard registration fees will apply, in addition to a $50 donation, when the licence is purchased and on registration renewals.
"The design for this plate was chosen by Nova Scotians," said Graham Steele, Minister of Acadian Affairs. "I'm pleased that anyone who registers for the new plate will also be supporting their local Acadian community."
Donations will go the Vive l'Acadie Community Support Fund which supports the development of cultural projects in the Acadian and francophone community and will be managed by designated community organizations through Acadian Affairs. One hundred per cent of the donation collected will go back to the community where it originated.
"On behalf of the Acadian and Francophone community, I thank the Minister of Acadian Affairs and the government of Nova Scotia for this important initiative, which will give great visibility to the Acadians and contribute financially to the Acadian and Francophone regions of the province," said Ron Robichaud, president of Fédération acadienne de la Nouvelle-Écosse.
For more information about the new licence plate go to www.accessns.ca or call 424-5851 in HRM or toll-free 1-800-898-7668.
Source: Release