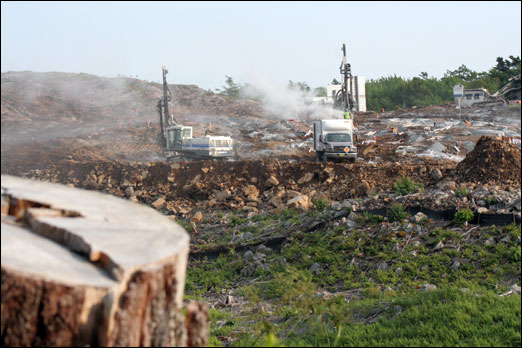 The Larry Uteck Interchange, located on the 102 between Hammonds Plains Road and Kearney Lake Road, is scheduled to open by August 2010.

It is hard to ignore the tree cutting and blasts that are taking place on Highway 102, between the Hammonds Plains Road and Kearney Lake Road exits.

From early in the morning to late in the evening, the trees are being cut down and land is cleared. A part of the highway is closed off and detour signs are in place daily from 6 to 8pm.

Daily, a horn announces the warning that a blast will take place. All over Bedford, the noise and tremors can be felt. According to Bedford residents, the experience resembles that of an earthquake.

The Larry Uteck Interchange is a necessary component for the final phase of Clayton Developments’ Ravines of Bedford South subdivision.

According to Paul Burgess, Infrastructure and Asset Management Engineer for HRM, “if everything goes well, the interchange is scheduled to be opened August 2010.”

The new development, which is a part of the Bedford South Master Plan, will cover 146 acres (59 hectares) to the east of Highway 102.

The interchange area will feature commercial buildings and could include such things as a grocery store, Canadian Tire and restaurants.

The rest of the development will include a mixture of residential dwellings, including single family homes, townhouses and apartment buildings.

Land has also been set aside for parks and open space.

Life is a highway
https://haligonia.ca/life-is-a-highway-4917/